HomeNews26.2 miles in support of Reach Within
NewsSports

26.2 miles in support of Reach Within 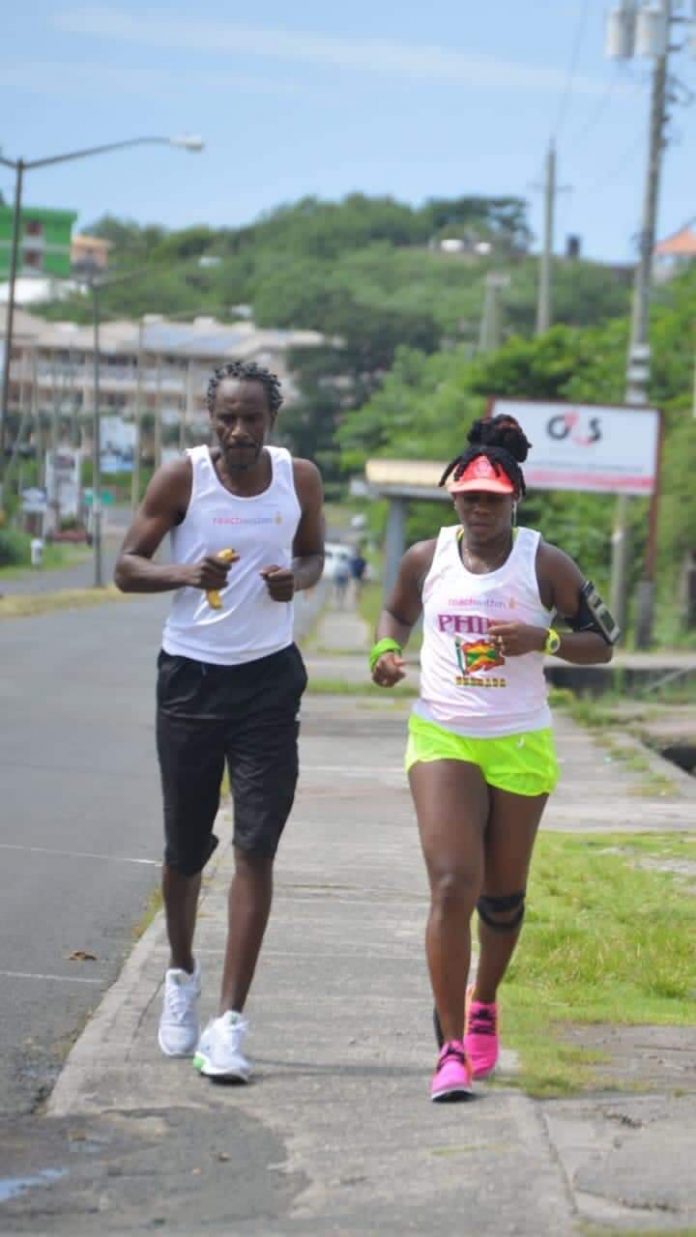 Sunday’s inclement weather did not stop marathon runner Philomena Robertson from completing a 26.2 mile-run through the streets of Grenada.

Her decision to run the marathon locally followed the cancellation of the 2020 TCS NYC Marathon due to COVID-19.

The run was in honour of Reach Within, a local charity that supports children who experienced abuse or neglect. So far, the run raised $4,600 with pledges from individuals and a corporate entity to make donations, said Ms Robertson, who thanked those who donated.

The run started at 4:30am from the westward facing bridge near the Grenada National Stadium; continuing through the town of Saint George, the Carenage, Port Highway and on to Grand Anse, Grand Anse Valley, Woodlands, Calivigny, Westerhall and Red Gate. The turnaround point was in front of the Mas Camp building in Bailles Bacolet.

The return loop saw the addition of the section of the Maurice Bishop Highway between the Sugar Mill and True Blue roundabouts and also the Morne Rouge loop. The run continued through Grand Anse, Port Highway and the Carenage, ending at the same bridge near the stadium.

Ms Robertson told The Grenadian Voice that previous runs in support of Reach Within were in the actual NYC Marathon “so I was really grateful that the cancellation of the marathon created the opportunity that enabled me to run at home.”

Throughout Ms Robertson’s sixth marathon run for Reach Within, she had the support of family and friends, who joined her at certain points along the way. They included her only daughter, her mother and Jerry Bascombe from Reach Within.

Ms Robertson said their support added a personal touch to the run, saying “it’s like I had my own cheerleading team.” She went on, “My family and friends have always been curious about my marathon experiences, flying to different places, just to run, so it was enlightening for them to see me actually go through the process of running 26.2 miles. This was actually my 21st marathon so it was a really nice way to reach that milestone.”

Describing a marathon experience, Ms Roberston shared, “For me, running a marathon takes me through a range of emotions, anticipation and excitement at the start, as the miles go by and various parts of my body start hurting, I tend to feel a bit melancholy, and then at the end, that great feeling of accomplishment. Through it all, there’s also that silent determination that I will finish what I started.”

She added, “In short, they saw the smiles and the tears and I felt their positive energy and it kept me going. When my back ached, my mom actually got out of the car and walked a bit of the route with me, that’s a memory I will cherish forever. My daughter, who has actually competed in races with me before in the BVI and China, also ran a couple miles with me.”

According to Ms Robertson, preparation was intense, noting that this year, she added a lot of core and strength training. “It was also a challenge juggling that and long hours of work but I did it, mission accomplished and ready for the next marathon,” she said.

Individuals can support Philomena’s marathon run by going to https://charity.gofundme.com/o/en/campaign/10for10reachwithin, donate $10 and get 10 friends to join you.

Ms Robertson has been running marathons since November 2011 and has since completed 20 marathons in various states across the USA and islands in the Caribbean.

In addition to being “a girl who loves running,” Ms Robertson has degrees in both media and international relations, is a well-travelled and accomplished professional who started her career as a broadcast journalist. She is currently is Press Secretary to the Prime Minister of Grenada.