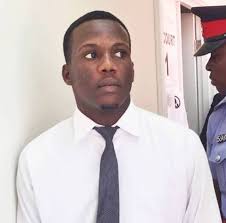 19-year-old Twely Joseph has been sentenced to 30 years and five months in prison to run from the date of sentencing, for the death of 8-year-old Ariel Bolah in 2017.

That sentencing was handed down by Judge Paula Gilford last Thursday (July 09) at the No.1 High Court after considering reports including psychiatric, social inquiry and also submissions from both the defense and the prosecution.

The gruesome murder of Ariel sent emotional shockwaves throughout Grenada and mixed emotions when it was discovered that the one accused of her killing was a teenager and her neighbour.

While some people are of the opinion that the length of his imprisonment is too short, the Office of the Director of Public Prosecution (DPP), explained that the offence was committed when Joseph was a minor (17 years old) and Section 64 (1) of the Juvenile Justice Act provides that a sentence of life imprisonment shall not be imposed on a child (under 18 years).

A twelve-member jury panel deliberated for just over two hours in December 2019 before finding Joseph guilty of Capital Murder, which originally provides for a sentence of death.

“But by virtue of Section 230A (8) of the Criminal Code such pronouncement could not be made against the convict as he was a juvenile at the time the offense was committed,” the DPP office explained.

The court also attached two ancillary orders to Joseph’s sentencing, which are:

Bolah’s body was found on November 11, 2017 in the bushes near her home in Frequente known as ‘Gwan Ca’ one day after she was reported missing.

According to reports at the time from members of the search party which comprised neighbours, the little girl was brutalized. There was a belt around her neck, a stab wound and bruises to various parts of her body including a piece of wood jammed inside her mouth.

The medical report from the court attributed Bolah’s death to sexual assault. It said her death was slow and she was alive at the time that she was being raped.

This newspaper has confirmed reports that the Child Welfare Authority had to intervene on more than one occasion before the girl was murdered.

Joseph was represented by Attorney at law, George Prime.