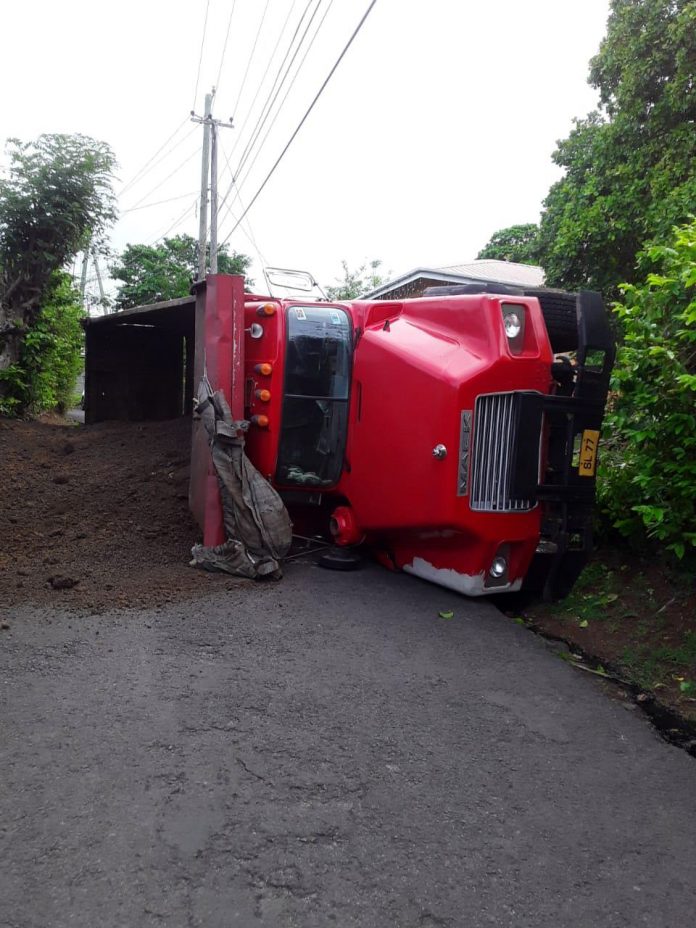 It was minutes to four on Saturday afternoon (June 20). Desmond Douglas was in his art studio at the side of the family grocery shop on Salisbury Road when he heard what sounded like “a big explosion” that made “the whole building shake.” He rushed outside in time to see a large gravel truck carrying a load of ‘binders’ turn over on the road just yards from his house.

He saw three people get out of a ‘Noah’ van and a driver emerge from the overturned truck.

“How the truck list, it was easy for him to come out,” Douglas said of the driver, and noted that no one appeared to have any injuries. Upon a closer look and talking to neighbours at the site, Douglas surmised that “the truck pulled away from the vehicle (and) went up on the bank” to avoid a head on collision. The heavy load caused the leaning truck to overturn. When Douglas got to his yard he saw where the truck had grazed the bottom step in front of his house and uprooted plants along the bank. This is not the first time.

“This is the third accident for the year along here,” he told The Grenadian Voice on Sunday (June 21), indicating a spot where the road curves and declines slightly, adding that there have been other minor accidents as well.

“Some days I’m afraid to come out of my house,” he said, because of the increasing number of trucks and buses, as well as private vehicles that speed by his shop and family home.

It took more than four hours to remove the dumped materials and the truck from the area. Some local residents have complained about traffic on Salisbury Road and requested speed bumps.

Residents and others who frequent the road, all of whom chose to remain anonymous, said calls have been made for “something to be done.”

“We tired of talking about it,” one said, while another added they have taken their complaints to parliamentary representatives over many years.

“It’s been years now, we’re told it’s ‘on the agenda’ but nothing happens even though it’s not safe,” Douglas said.

An officer from the Royal Grenada Police Force traffic department in Grenville said there have been four accidents reported on Salisbury Road for 2020; two involving private vehicles and two involving “commercial public transport,” of which three were minor and one caused serious damage to the vehicle. He said the accident on Saturday, considered minor, is under investigation.

An official from the Ministry of Infrastructure Development, Public Utilities, Energy, Transport and Implementation told this newspaper that there is “a plan for the Eastern Highway,” which is “in the preliminary stage of negotiations.” However, a budget is yet to be established. The officials said a request will be made to “the Road Office to install road bumps in the area while we work on the bigger project.”

In addition to local area traffic, Salisbury Road is used by some truckers, bus operators and other drivers to avoid Grenville traffic. It is mainly a residential road, with some local grocery/rum shops and a few commercial outlets, including welding and woodworker businesses. The road intersects with Cemetery Road, Chappell Road, Wells Road and Hills Road; some residents said speed limits and yield signs would also help.

One long-time truck driver said it takes “special care” to manoeuver trucks carrying heavy loads on the narrow road with its sharp edges.

“You have to be extra careful. You have to look ahead,” he said, pointing to the corner where the accident occurred on Saturday.

Pedestrian traffic is a daily occurrence along the road. In pre-COVID-19 days, Salisbury Road was often the scene of long funeral processions to the Grand Bras Cemetery. Students walk the road to schools, while sales vans ply the road with their products.