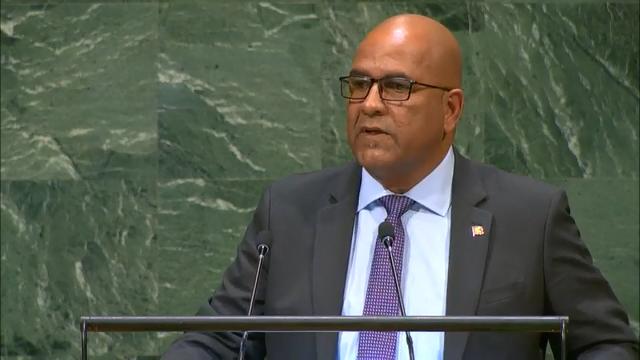 The death penalty and LGBTQ (lesbian, gay, bisexual, transgender and queer) rights are among the recommendations that Grenada could not accept; however according to Minister of Foreign Affairs Peter David, they were noted.

The Office of the Ombudsman will provide a short-term home for a National Human Rights Institution which is among 148 recommendations Grenada received from the United Nations Human Rights Council. Speaking at a post Cabinet press briefing on September 22, Hon David said Grenada accepted 99 recommendations.

It is expected that some of the 49 recommendations noted, but not accepted by Grenada, may eventually be brought before the National Human Rights Institution.

“Quite frankly countries can only do what countries can do,” and any recommendations that Grenada accepts “had to be first accepted by our people. So while we have things like LGBTQ and death penalty, these are issues that will depend…,” he said.

Recognising that some people feel passionate about the need to address such issues as same sex marriage, as is happening in Barbados now, the Minister stated: “Maybe one day Grenada will come to that but, at this time, Grenada cannot accept those recommendations because it does not reflect the wishes of the Grenadian people.”

Minister David said he travelled to Geneva earlier this year to present Grenada’s report to the United Nations Human Rights Council on behalf of the National Coordination Committee that represents a collaborative effort among government, non-government, community-based and advocacy groups.

Under the rights to privacy, marriage and family life, in noting the recommendation, Grenada “commits to seeking assistance from the OHCHR (Office of the United Nations High Commissioner for Human Rights) for engagement with the relevant local stakeholders as it pertains to this issue; noting that this is a significant deviation from current legislation and would as a result require extensive public consultation to garner the necessary support for policy change.”

With respect to the area of life, liberty and security in relation to the death penalty, the National Coordination Committee stated: “A de facto moratorium has been in place since 1978 and death penalty is no longer mandatory as enunciated in the Privy Council’s decision in 2006,” in noting the recommendation. Grenada’s response also states that Cabinet has commissioned the National Coordinating Committee “to conceptualize the process for the institute (National Human Rights Institution) and will map out the follow-up process, ensure wide consultation, draft action plans and report to Cabinet.”