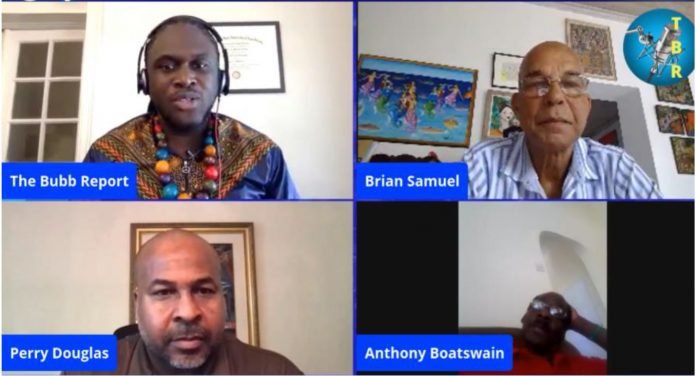 Member of Parliament for Saint Patrick West, Hon Anthony Boatswain, abruptly and unceremoniously ended a live discussion on the proposed 500-room development in Levera, Saint Patrick, after stating disdain for the word ‘corruption.’

Boatswain was among three guests on a social media programme, The Bubb Report, hosted by Grenadian journalist Kellon Bubb, who resides overseas.

The Grenadian guests, while stating no objection to development, raised concerns about the magnitude of the project and its sustainability, as well as its impact on the ecosystem, as Levera is a safe haven for turtle nesting and other wild life.

The hotel is to be constructed by Singapore Heng Sheng Grenada Development Limited under the Citizenship by Investment Program.

Brian Samuel, who majors in Project Financing and resides in Barbados, doesn’t think that Levera is ideal. He noted that the beach is windy and dangerous, and the area is a long drive from the lone airport.

Estimating that the investment will be over US$1 billion in comparison to Grenada’s GDP of US$1.1 billion, Samuel said, “We do not have the capacity to absorb this level of expenditure over a few years.”

Further, he noted that the investors would not be around long term to sustain the project as their main goal was to obtain Grenada passports.

Perry Douglas, who resides in Toronto, challenged the MP to present facts (Return on Investment statement, business plan, etc.) to convince Grenadians that this project is worthwhile, having the opinion that there isn’t a demand for it in that area.

MP Boatswain expressed belief that “the size [of the project] is way beyond the carrying capacity of the area,” however he noted that poverty assessments done show that the parish has the highest level of poverty and unemployment. Added to that he stressed the need to increase Grenada’s room stock.

Nonetheless, Douglas suggested instead investing in small hotels or other businesses around the island where locals will be more involved in ownership and management.

“You can’t negotiate from a position of being desperate,” Douglas said, noting that few locals get jobs from investments funded by Chinese.

“You are setting up a disaster for your country,” he warned.

Douglas went on, “I have multiple investments in Grenada, I have family in Grenada and there are things that can bring big investors in Grenada which I have tried and done before; but because Government policies are so terrible and Grenada is so high on the corruption curve that when smart investors look, they are like no way, we can’t make money in Grenada…no legitimate investor is going to come….”

According to Transparency International’s Corruption Perceptions Index, Grenada received a score of 53 out of 100 and ranked at 51 out of 180 countries – moving two places up from 53 in 2018.

MP Boatswain seemingly agitated, responded by calling for facts to back up his statement. “Why don’t you present your facts, you are an investor, a financier, why don’t you take over the Levera project, say let’s forget the Chinese I will get a consortium of local investors and do an eco-tourism project there. A lot of us talk from arms’ length, condemn government for corruption and yet you do nothing,” he said.

The MP continued despite attempts by the host to interject, “come with your proposal for development, take over the project we will give it to you. We will send the Chinese out tomorrow, come with your proposal. Too many chair speculators out there criticizing…let us not get into this nonsense about corruption, what you know about corruption, bring the facts. Come and invest, you invest nothing in Grenada, but you run your mouth. What have you done for Grenada?”

At further attempts by the host to interject, Boatswain said, “I have to go, I can’t take this nonsense from these guys who don’t live in Grenada, they don’t contribute to Grenada but run their mouth about Grenada, about corruption and who is corrupt, change the narrative,” at which point he exited the live discussion.

As the conversation continued, Douglas called on government to be transparent for quality investment, adding that selling passports is not sustainable.

Meanwhile, the MP’s comments have sparked reaction from Grenadians living in the diaspora who are expressing themselves on social media that they too contribute to Grenada via remittances, sponsorship of local activities, payment of taxes on properties in Grenada, owning local businesses, etcetera.

To highlight the relevance of the Diaspora in these discussions, reference was also made to Minister of Foreign Affairs, Hon Peter David’s sentiment recently. During a virtual engagement hosted by Prime Minister Dr the right Hon Keith Mitchell and other Ministers, David said a policy is being developed to effectively engage the Diaspora in the development of Grenada, not with materials but also with ideas. “The Diaspora is the 16th constituency in Grenada,” he said.