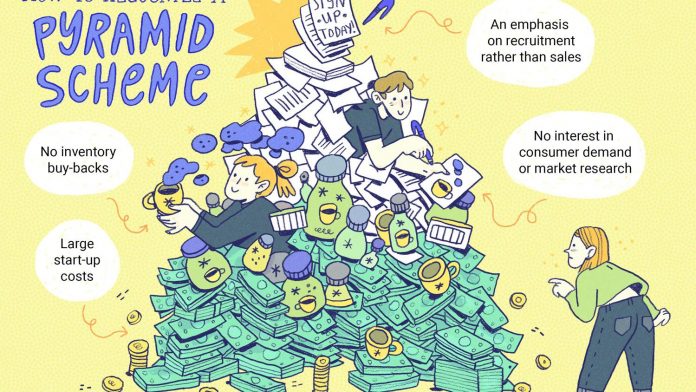 Ariza credit union is warning the general public to not lose hard-earned savings via pyramid schemes, which recently have become popular in Grenada.

In an advisory posted on its website and social media platform, Ariza, without giving a name, revealed that one such investment “opportunity” which is in fact a “pyramid scheme,” has been circulating recently.

The credit union shared that “This involves the exchange of money primarily for enrolling other people into the scheme without a legitimate product or service being delivered. These schemes are often disguised as transactions in new or poorly understood investment instruments, including different types of securities, foreign currency trades, precious metals and even exotic commodities.”

Further, the credit union explained that “Generally participants are required to recruit friends or family members to enter the scheme and make contributions. If you do this successfully, you are paid or gifted out of their contributions.  Your family and friends are then told to recruit others to keep the chain going. Your money is not actually invested in any product but rather, it is simply paid in a defined sequence to other members. Eventually, due to a limited pool of persons, the number of new recruits fails to sustain the payment structure and the scheme collapses with most people losing their money.  This is particularly true for small territories, like Grenada, with a small or finite population.”

This newspaper has information of many people losing monies in the past in a scheme called ‘NETSU’ in which a student of the law was involved.

In recent months, several Grenadians have been recruited into Tradera, a trading educational and networking platform, which fits the description of such schemes as described by the credit union.

However, a spokesperson of Tradera, Sayyid Campbell, in a local newscast explained that Tradera “[is] a real company, we are like a school helping people learn how to tap into a $6 trillion market place and re-direct some of that wealth into their family, community, country. The idea is to stimulate local economies by helping people.”

He said the company is “operating in a heavily regulated environment in North America, our ‘Is’ need to be dotted and our ‘Ts’ crossed otherwise we would be shut down. We are not operating in an offshore environment, we don’t take anyone’s money. Under no circumstance, do we take anyone’s money. We provide financial services, we teach people the basics to advance strategy in the FOREX (Foreign Exchange) market, a $6 trillion a day marketplace.”

Campbell added that their services involve trade alerts, live sessions, worldwide study groups and market forecasts, among others, that helps clients made extra cash in an industry that has been untapped for decades but is now opening to people worldwide because of financial education.

In the Advisory, Ariza noted that within the current economic climate, it is aware that many people may have financial vulnerabilities and gladly looking for avenues to supplement their income.

Therefore, it encourages members and the general public “to be vigilant as it relates to investment vehicles that may be presented as opportunities to earn additional income but can result in the loss of hard- earned savings.”

The distinguishable characteristics of Pyramid schemes as outlined by Ariza include:

The credit union advised that when investment opportunities are being pursued, “it is important to verify that it is a legitimate business that is regulated and licensed to conduct such transactions.”

Facebook
WhatsApp
Previous articleKeep your foot on the pedal
Next articleA Question of Protection: The Future of COVID-19 Vaccinations for Grenada