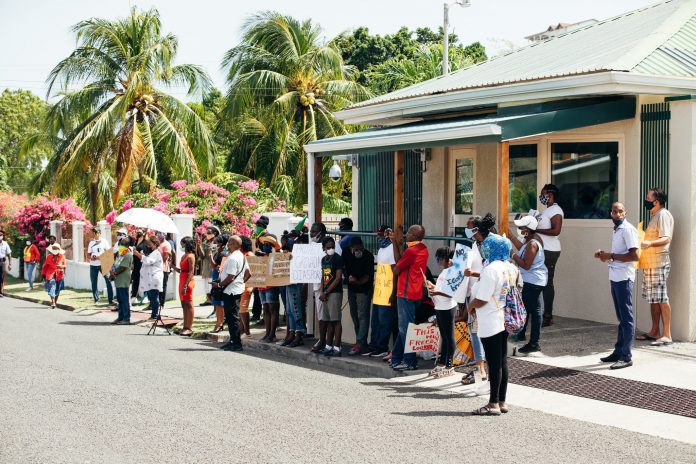 some and chants of “I need to breathe” and “get your knees off my neck” during a peaceful gathering in front of the Embassy of the United States of America in L’anse Aux Epines on Monday (June 08).
Organised by lawyers at the Criminal Defence Bar of Grenada, the “protest rally” was called to demonstrate “against racist police violence and the threat of US military force in American cities (and) against Grenadians in the Diaspora.”
Attorney Dawn DeCoteau, who was born in the United Kingdom to Grenadian parents, said the gathering is in solidarity with the family of George Floyd and all “brothers and sisters who have lost their lives at the hands of police, in the United States, England and the wider world.”
As vehicles drove past, with some drivers honking horns and passengers waving in support, DeCoteau and other speakers expressed outrage and hurt at the death of Floyd and the revelations of many others who have fallen victim to violent police officers.
“I am hurting for us as a black people,” DeCoteau said, adding “We have to come together as a collective force to continue the fight and the struggle.” Black people continue to experience discrimination in “all walks of society” in all countries, including Caribbean countries, she said to applauds of agreement.
Attorney Jerry Edwin said protesting the injustice against Americans is but one reason the gathering was called, noting that there are more than 100,000 Grenadians living in the US. Calling out zip codes with participants shouting more zip codes, he declared “that’s where our people live.”
“Take your hands off our diaspora,” he said, pointing to the American Embassy.
Referred to as an “open forum” participants were free to express their thoughts at the microphone.
India Sky Phillip said she attended the gathering “to make a difference.”
“When I saw that video I thought that could have been my dad, my brother, my uncle.”
Lucy King said she felt compelled to attend the gathering, as she lived in the US for over 40 years and her only son lives there.
“Racism is real and enough is enough,” she said with emotion.
A Grenadian who grew up in Brooklyn New York said “the arm of imperialism is long and strong” and warned it reaches Grenada, claiming “we are not safe and protected in this little paradise.”
Another young Grenadian said it is time for “us to know ourselves” as black people.
“You cannot make a powerful statement without knowledge of self,” he said, and encouraged citizens to know their history, learn the names of the African tribes of their ancestors and understand what has been taken from black people over the centuries.
“Question everything,” he said, including what is taught in school.
Meanwhile, a press release from the US Embassy, Saint George’s Principal Officer Karl Duckworth
issued the following statement regarding the protest outside the Embassy today, June 08.
“Guided by our founding principles of freedom and equality and our Constitutional charge to form a
more perfect union, the United States supports free speech and peaceful assembly. We are committed
to accountability and the elimination of racial discrimination. We support those who cry out for justice
and the transparent judicial process to achieve it.”