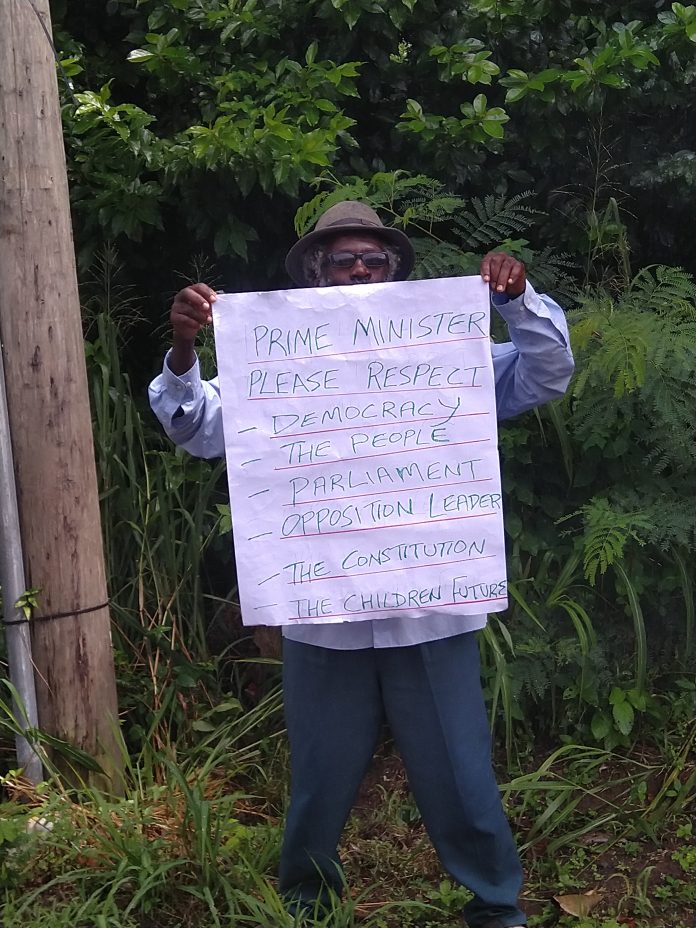 Believing democracy in Grenada is being undermined, public policies advocate Joseph Roberts, sought to bring this to the attention of the Governor General and Parliamentarians, calling for a change.

Last Friday (Oct 09) Roberts conspicuously positioned himself at the entrance to the Grenada Parliament building bearing a placard, which highlighted “the need to have a better representation of the people.”

His hope was that this placard would be read by those in authority as they made their way into the Parliament building to observe the opening of the 4th Session of the 10th Parliament.

Joseph said his effort is a response to Opposition Leader Tobias Clement’s call for Grenadians to come forward and assist in rescuing Grenada.

Speaking to The Grenadian Voice, Joseph noted the limited number of persons from the public allowed into the parliament building, which has a seating capacity of just over 200, due to the COVID-19 protocols.

“I find that is ridiculous because Parliament should be a reflection of the people’s business,” he said, noting that even if protocols have to be observed, there should be a sample of the public present to witness what is taking place. “This to me is a blow to our democracy.”

Secondly, Joseph claimed that the Parliamentary Electoral Office does not provide sufficient information to the public. He said since February, many persons went to have their expired Voters ID cards renewed but, to date, they have yet to receive the replacements.

As representative of the Queen – Head of Commonwealth, Joseph called on Dame Cecile La Grenade to

be involved in defending Grenada’s democracy.

Thirdly, the advocate called on the Prime Minister to show more respect to Parliament in that the Opposition Leader’s questions must be answered thoroughly. “He is not asking the questions only for himself, he is asking on behalf of all of us because to have one side in Parliament takes away from the true meaning of participatory democracy and I think more effort should be made to show more respect to our official Leader of the Opposition,” he said.

Facebook
WhatsApp
Previous articleWhat a scare!
Next articleThe call for help for disabled man is answered