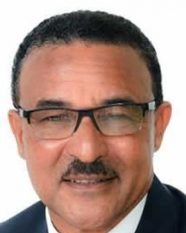 The issue that hit the streets recently with Terry Forrester and the Physical Planning Unit (PPU), has sparked discussions in some circles with not everyone agreeing to the claim that Terry is a victim.

The issue stems from a wooden building, owned by Forrester along the main road in Calliste that is being constructed against the rules that govern the Physical Planning of the land. Forrester said that it is an expansion project to his office. After receiving a stop notice from the Physical Planning Unit, he admitted to violating the set back regulations by some 24 feet. Well then it would have shown him up in a different light as one of our leaders, if he had apologised and sought a compromise. But he chose to go the defiant way because he views the issue as victimisation against him.

He invited the media to a press conference with his attorney Anslem Clouden so as to respond to a stop notice issued by the Physical Planning Unit last Friday relative to his ongoing office expansion project since in his words “they have claimed that I have violated the set back regulations by the PPU”. Well then pardon us Sir if we got it wrong that that was what you admitted to.

As one who has been involved in politics for many years, Forrester should know his defence that such regulations have been flouted by many in recent times and set precedencies all over the country, cannot take away what he is found guilty of, since two wrongs have never made a right.

We found it necessary to address the issue because if one should dissect postings on social media carefully it seems that young people are seeking leaders and mentors that they can respect and not make fun of through memes (A humorous image, video, piece of text, etcetera, that is copied and spread by internet users). The Government has created a literate society by way of our home-grown university and the many scholarships abroad and we should be mindful of that. Many of our young people have degrees and are now impatient with foolishness. Let us show some respect for them in deciding on the way forward.

Forrester cited victimization as being afoot because “Foreigners such as “Silver Sands project, Kiwana Bay project, the Best for Less (store) building next to C Ks and several others are allowed to violate the regulations with impunity and with protection from the Prime Minister and chairman of the PPU, etal.” Well to that Godfrey Augustine or Scholar will say “Cat luck is not dog luck” and we take it that he will know what is meant by that by virtue of his age and place of origin.

In the case of the Silversands project, it was admitted publicly that the man made a little mistake with the measurements on the beach and the issue was settled after public protests with an amicable compromise; that is a good example for all of us to follow because again we say two wrongs will never make a right.  In connection with Forrester’s opinion that foreigners are allowed to flout and disrespect our laws and regulations, don’t we all have a part to play in making sure the laws of the land are kept?  Forrester has revealed his intention to call upon the Financial Investigation Unit (FIU) to launch an investigation into the finances of the Prime Minister, the Chairman and Board of Directors of the Physical Planning Unit because it is alleged that large sums of monies are being paid to such individuals so as to ignore the said PPU regulations. While this may be true, it is good to remember that a man is innocent until proven guilty in a court of law.

It is our hope that he will follow through on that and not treat the issue as “unmasking the masked men.” We wish you well!