Cause of fire undetermined 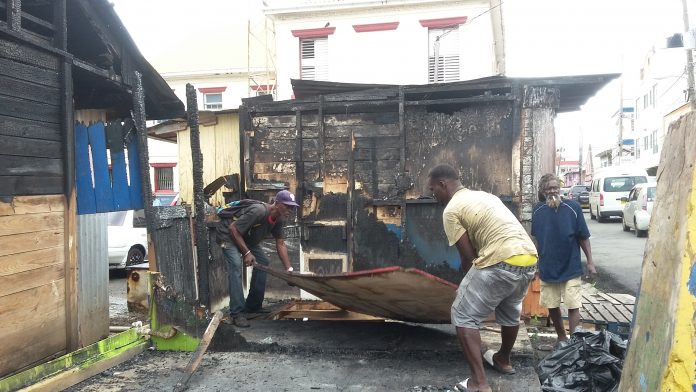 The cause of the fire that destroyed a small business on Victoria Street in the early hours of August 14, 2020 is “undetermined,” according to Corporal Chad Harley, officer in charge of the fire department at the Grenville Police Station.

Speaking to The Grenadian Voice on Monday, Corporal Harley said there is no evidence to show foul play. Based on the evidence, the fire is “looking as accidental” but, officially, it remains undetermined as there is not conclusive evidence to say it was an accident, he explained.

With the work of the Royal Grenada Police Force complete and the yellow tape removed from around the site on Victoria Street, the job of clearing the debris became the responsibility of business owner Leslie ann St Louis Celestine.

“I want to rebuild. I’m getting an estimate from a carpenter,” she told The Grenadian Voice on Monday. Her husband, Aldwyn Celestine, and a crew of workers were busy knocking down the remaining walls and loading the burnt debris on to a truck on Monday.

The business, known locally as the Sledge, has long family ties for Leslie ann. It dates back to the 1960s and was named after the truck from which her mother Catherine St Louis sold onion, garlic, salt fish and other items she brought from Trinidad.

Three businesses operated from the wooden building that is part of a cluster of small shops near the Fish Market and the Grenville Police Station. On the morning of the fire, the police broke down the door of the Sledge with an axe and accessed water from a nearby hydrant to prevent the fire from overtaking the two adjoining businesses.