HomeNewsCelebrating a century of service
News

Celebrating a century of service 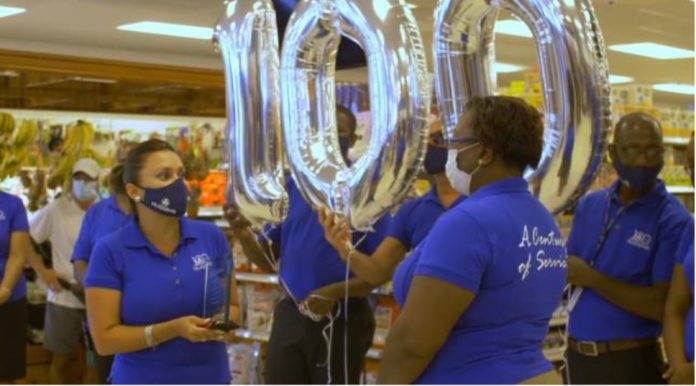 A formal public discussion on the company’s journey, was among the activities staged by Geo. F. Huggins & Co (G’da) Ltd to commemorate its 100th year anniversary.

On  July 20, 2020,  members of the Board of Directors and Senior Management team of Huggins, along with their Brand Ambassador Shondell “Dash” Amada, visited all 17 departments of Huggins across the island to express gratitude and award long serving staff.

The company had planned a year-long celebration, which included a thanksgiving service at the Blessed Sacrament Church in Grand Anse. The outdoor celebration which was planned for this month with staff and customers, was cancelled due to COVID-19 restrictions.

Huggins, one of the oldest and largest firms in Grenada, now employs over 500 employees.

In 1973, the Company became a member of the T. Geddes Grant Group of Companies, which operates in many of the regional territories.

In 1992, the Geddes Grant Group merged with the Caribbean conglomerate Neal & Massy, thereby effectively becoming part of the largest and most diversified trading group in the area; with representation in countries from Guyana to North America.

At the outset, Huggins dealt mainly with some of the island’s chief export crops – Cocoa, Nutmeg & Mace, purchasing same from local estates. These were then prepared and shipped to foreign markets. Certain Steamship companies were also represented.

Over the years, the company diversified with numerous departments and divisions. They include a Travel Service and Tour Operation, a Shipping Department representing both Cruise and Cargo Lines, an Insurance Department, a Motor Department complimented by a modern garage selling the well-known Nissan and Hyundai vehicles, Tyre Sales/Service as well as a Spare Parts Department.

Huggins operates a Farm and Garden Centre, an Office Services Division where Xerox and other lines of equipment are sold and a Pharmaceutical Division which is represented by many well-known brand names.

There are also two supermarkets operating under the name of Foodland. One is located in the heart of the city and the other at Kirani James Boulevard (formerly known as Lagoon Road) in St. George’s.

Huggins also sells all Texaco products including LPG – Texgas that is distributed islandwide. A Lumber Yard and Builders Hardware can be found at a branch in Grenville.

Huggins is actively involved in the sporting, cultural and general development of Grenada. It supports numerous activities, organisations and clubs including Huggins United Netball Team – OECS champion for many years.