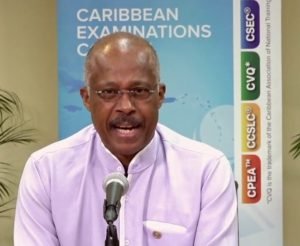 An urgent need to address all stakeholders’ concerns and conduct an audit review of the ecosystem within the Caribbean Examination Council (CXC) are among the recommendations made to CXC by the independent review team.

The findings and recommendations were presented during a virtual media conference on Sunday and later this week the report was expected to be presented to Education Ministers while “the management of CXC will then proceed to roll out the public engagement strategy to begin the healing process,” Chairman of CXC, Professor Sir Hilary Beckles said.

Professor Sir Beckles, who convened the independent review team to investigate concerns relating to the modified approach to this year’s Caribbean Advanced Proficiency Examinations (CAPE) and Caribbean Secondary Education Certificate (CSEC) examination results, shared that a breakdown in communication between schools and CXC, was identified. He said this could have led to students across the region receiving lower/ungraded results, which led to complaints across the region following the release of results last month.

Sir Beckles said the team also found technical challenges in the examinations’ communications between CXC and some schools, noting however that CXC could have responded “with greater alacrity, notwithstanding the logistical and other technical challenges associated with the COVID-19 pandemic.”

CXC Registrar and Chief Executive Officer (CEO), Dr Wayne Wesley said the recommendations will be implemented promptly, among them is putting additional measures in place this week so that candidates can get prompt response to queries and extending the deadline for requesting queries and reviews of exam results

He promised to ensure that the backlog of requests for queries and reviews was cleared this week, especially for students wishing to enter college and universities.

Providing statistics which indicated that CXC received thousands more requests for grades to be queried or reviewed this year, Dr Wesley noted that the deadline date for requests has been moved from October 23 to November 06.

In addition, the CEO said CXC will reduce the fees associated with the request for review by 50%. “So now the request or review will be US$15 and those persons who have already paid for their review, the difference will be refunded,” he said.

Where the review indicated a decrease in grades, there will be no refund.

The Registrar shared that across the region, there was a total of 13,874 CAPE and CSEC “ungraded” results compared to 8,819 last year. This was because some part of the School Based Assessment (SBA) or submission of information regarding SBA were outstanding. Nonetheless, he said CXC had been in contact with schools to provide the information to be processed.

According to Sir Beckles, “the system allows for the full communication of all necessary elements, so that a final adjudication can be made. And this is one of the issues that was raised in terms of the communication interface between the providers the school, the colleges and how that information comes into the CXC organisation. That’s an area of concern that has been picked up within the context.”

Despite the findings, Sir Beckles noted that CXC’s modified approach to the exams were “educationally and technically sound” and its system of marking and the adjudication of performance and assessment were also “technically sound.” Nonetheless, he said there was a measure of misunderstanding about the nature of the changes, particularly within the schools setting. These misunderstanding, he said contributed to the anxiety expressed by stakeholders.

in keeping with the recommendation for an audit review of the ecosystem within CXC, Sir Beckles said “all of the parts of the educational system in which CXC is a critical component, the relationships between all of these components must now be reviewed, audited and enhanced.”

In addition, he said an audit is to be conducted into the operational and governance principles that are inherent within the CXC model.

Chair of the review team was Professor Hazel Simmons-McDonald, Professor Emerita and retired Pro Vice-Chancellor and Principal of the Open Campus, The University of the West Indies. Other members of the team were Professor Andrew Downes, retired Pro Vice- Chancellor, Planning and Development, The University of the West Indies; Professor Francis De Lanoy, President of the University of Curacao; Mr. Harrilal Seecharan, retired Chief Education Officer, Ministry of Education, Republic of Trinidad and Tobago; and the Hon. Michael S. Browne, Minister of Education in Antigua and Barbuda and Chair of the CARICOM Council for Human and Social Development (COHSOD).