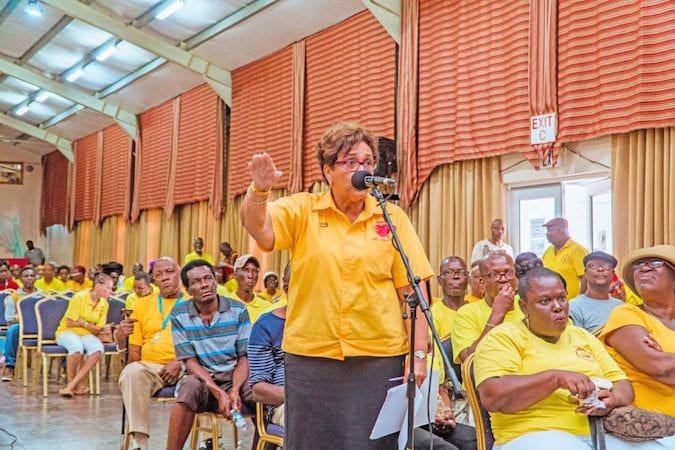 The Leader of the National Democratic Congress (NDC) has alluded that the newly appointed Leader of Opposition Tobias Clement, cannot be trusted.

In speaking on NDC’s Sunday radio programme, Franka Bernardine took a swipe at Clement and accused him of trying to “break-up NDC” by naming one of their Senators to join him in the opposition. “Anyway Keryene was smart enough to see through his plan and so she dropped out,” Bernardine said.
In speaking to The Grenadian Voice on the issue, Clement expressed doubts over the competency of the leader of the NDC.

“Poor lady, she has no idea about politics. Is NDC together? That’s news, she finally able to put it together and keep it together. Good luck Franka,” Clement said.

Last week the opposition Leader was forced to quickly find a substitute for Kerryene James who was one of the two names he submitted to the Governor General. Reports are that she notified Clement via email that she opted out for personal reasons. James was at the time one of two NDC Senators in the Upper House.
While not being the official opposition party, the NDC commanded 41% of the electorate in the last General Elections. The party was unable however, to win a seat in the last General Elections.

Bernardine hinted that Clement may still be working undercover for the ruling New National Party (NNP) although he officially resigned last November.
“We are not even sure who you represent. Is it your former party leader who put you up to all of this? Because your views seem to be those of the NNP. Look at your position on Grenlec,” the NDC leader said.

Clement said that his position on Grenlec is not guided by NNP’s position. “It it guided by the US law of 1890, The Sherman Antitrust Law which bars any company from holding a monopoly in the United States. I wonder if they ever revisited the arrangement NDC made with Grenlec in 1994. I had to beg Grenlec for permission to put a solar panel on my roof. I have nothing against Grenlec, what I am against is monopoly by any company; it is not good for consumers.”

In calling on Clement as the leader of Her Majesty’s Opposition and in the interest of the people of Grenada, Bernardine invites him to join with NDC in a call to Government to locate the international fraudsters and institute legal proceedings. “We want Grenada’s money back. As it’s your job as opposition leader we want you to call on Government to tell us what is the status of the oil and gas agreement, where is Grenada’s oil? We also expect you, Mr Opposition Leader, as a member of the accounts Committee to let us know how and where our monies are spent.”

Facebook
WhatsApp
Previous articleMinister: Teachers are not being punished
Next articleLet’s not forget them!