HomeSportsEngland beaten in ODI home series for the first time in five...
Sports 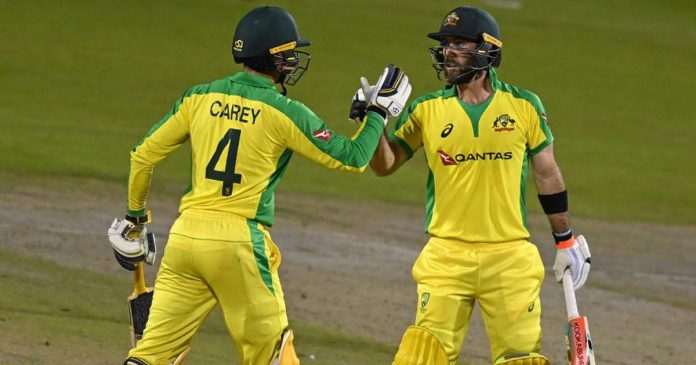 TV spectators and others were provided with a thrilling finish to the series, a dramatic Australia victory over England in the third and final one day international, a victory which gave the Aussies the three-match series two games to one.

England at one stage looked all set to bundle out the Australians who, at one stage, were 73 for 5 wickets, chasing 303, however, that was not to be. Glenn Maxwell and Alex Carey’s record-breaking 212-run partnership steered Australia to a thrilling win over England at Emirates Old Trafford.

Chasing 303, Maxwell hit a blistering 108 from 90 balls and Carey a more measured 106 as a belligerent partnership rescued Australia from 73-5.

Maxwell fell with 15 balls remaining and Carey holed out at the end of the 49th over to leave Australia needing 10 runs from the final six balls.

However, Mitchell Starc pummelled the first ball from Adil Rashid for six, and a swept boundary ensured Australia sneaked over the line with two balls remaining.

According to BBC Sports, the defeat ended England’s five-year unbeaten run in home ODI series, as well as being their first series loss of the summer.

Jonny Bairstow had earlier made 112 to help England recover from losing two wickets to the first two deliveries of the innings and post 302-7.

England could have dismissed Carey for nine had Jofra Archer not overstepped when the Australia wicketkeeper was caught at third man off a ballooning top edge.

Carey went on to make England pay – hitting his first ODI century, with he and Maxwell surpassing Brad Haddin and Mike Hussey’s stand of 165 against West Indies in 2006 to compile Australia’s highest sixth-wicket partnership in ODIs.

This was the end of a long summer for England, but a welcome win for Australia, who were whitewashed on their last limited-overs visit in 2018.