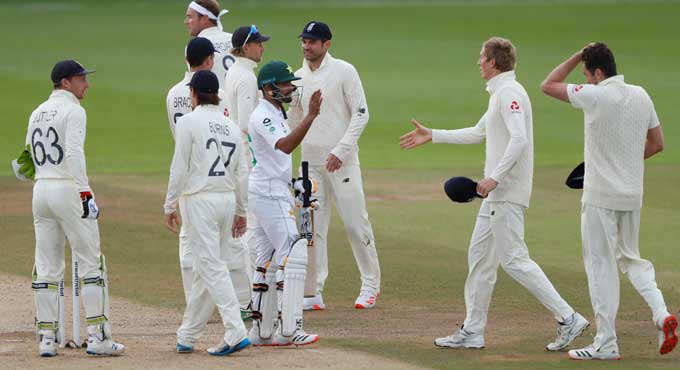 England won their second successive Test series this summer, the latest victim being Pakistan. In the June/July, England defeated West Indies two matches to one.

The Test series between England and Pakistan ended Tuesday with the third and final match ending in a draw at the Ageas Bowl.

Torrential rain prevented any play until 16:15 BST at the Ageas Bowl, all but ensuring the draw that left England with a 1-0 series win.

There was still the opportunity for Anderson’s moment of history, which came from his 14th delivery of the day when he had Azhar Ali caught by Joe Root at first slip.

Root himself also had Asad Shafiq held at short leg, Pakistan closing on 187-4 following-on in their second innings, 123 runs behind.

England still recorded their first series victory over Pakistan in 10 years, but remained third in the World Test Championship behind India and Australia.

Even if that new competition overcomes the obstacles of the coronavirus pandemic, England face a huge battle to reach the final. In the meantime, the bio-secure summer continues when an entirely different England squad takes on Pakistan in a three-match Twenty20 series in Manchester, beginning on Friday.