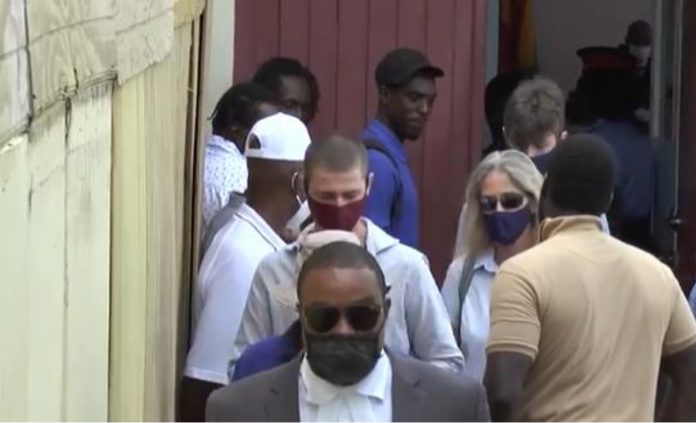 Wife of Evan Smith, whose husband’s famous Fort Judy court matter has been adjourned to February next year, has expressed anger in the handling of the matter up to this point.

Reports are that failure by the Prosecution Department to present the files for the matter between Donal Kavanaugh and his family, and Evan Smith, prior to Tuesday’s (July 28) court date, has resulted in the matter’s adjournment to February 15, 2021.

Kavanaugh and Sarah Hatton were charged for causing harm to Smith, but this charge was later changed to wounding. The Kavanaugh’s two minor children are now jointly charged with their parents for wounding Smith.

“What’s really going on,” questioned Nicole Smith in a televised newscast, as she assumed that the Department of Public Prosecution (DPP) apparently received the relevant documents only on Tuesday, as the couple and children made their first court appearance before Magistrate Teddy St Louis at the Saint George’s Magistrate Court.

“We were not summoned to come to court, nobody called us. We are the ones that have been asking the questions – what should we do, where do we go,” she said.

Nicole Smith said she and her husband were advised by their lawyer that the DPP was supposed to inform them of the court date.

“I call this nonsense, this is total disrespect,” she uttered, asking for the speedy handling of court cases, and questioned the reason for the long adjournment of her husband’s matter.

Nicole is concerned that her sick husband has to deal with this matter much longer. Seven years ago, he was diagnosed with a medical condition that is deteriorating. The disease causes him to be unable to speak properly and the wastage of his muscles impedes his mobility resulting in him being unable to walk properly and lift his hands above his head.

She expressed, “my husband’s condition from since the time of the incident [on June 25] to now, his condition has worsened. He couldn’t even speak this morning from the anxiety building up to see the family [in court], the whole scene is recapping in his head.”

In June, Smith appeared on television with his wife claiming the Kavanaughs physically attacked him after he accidentally drove his van over their dog, which later died, along the Fort Jeudy main road in Saint George.