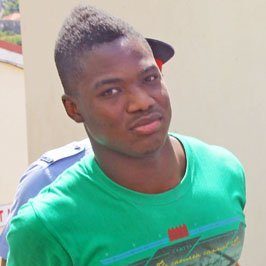 Akim Andrew was denied bail and remanded to Her Majesty’s prison on Thursday to return to court on July 20, 2020.

On Tuesday he was again arrested and charged for fraud by false pretense.

The 19-year-old father of two, Akim Andrew from Loretto, Saint John appeared at Saint George’s Magistrate court before Chief Magistrate Teddy St Louis but this time he says he is innocent of the charges.

A source close to the Police told this newspaper that Akim was slapped with a charge of fraud by false pretence again this time in relation to an incident with a businessman.

Attorney Jerry Edwin who is again representing Andrews said that his client says that he is innocent this time.

The allegation is that Akim defrauded a Chinese businessman of some $3000 while on bail for another allegation that he had defrauded another good citizen of Grenada of $250.

Legal Representative Jerry Edwin says that he admits having received funds from the Chinese businessman “but this is a payment that he gave to me. So, the matter is a little complicated; there are some complex issues that I would want to get to the bottom of.”

Edwin added that his action creates an image of a non-repentant young man “bent defrauding vulnerable people. However, Akim is the kind of individual who when he does something and he is apprehended he will come forward and admit his guilt, not the case here. Akim is saying I am not guilty of these offenses…I am a victim of my reputation.”

The Lawyer says he wants to make swift restitution if in fact the evidence does bear out that Akim did commit the offences. “My client has a credibility issue so I would want to see the documents that these charges are based on and form an opinion that I can advise my client what it is, that is in his best penial interest. Akim is saying I did not do that, but he is willing to return the man’s money to him so that this matter is not prolonged in the court.”

In January Akim pleaded guilty to charges of four counts of practicing medicine without being registered and two counts of fraud.

It was revealed that he falsely claimed that he attended the St George’s University (SGU) in Grenada and finished his medical degree in Denver.

In other scenarios Akim pretended to be an insurance salesman and a Police Officer.

On those charges of fraud by false pretence, Andrew was sentenced to one hundred hours of community service and in default will serve six months in prison.

Cynical Psychologist Dr Augustine Panchoo diagnosed Andrew then with Anti-social personality disorder, which is a mental condition in which a person has a long-term pattern of manipulating, exploiting, or violating the rights of others without any remorse.