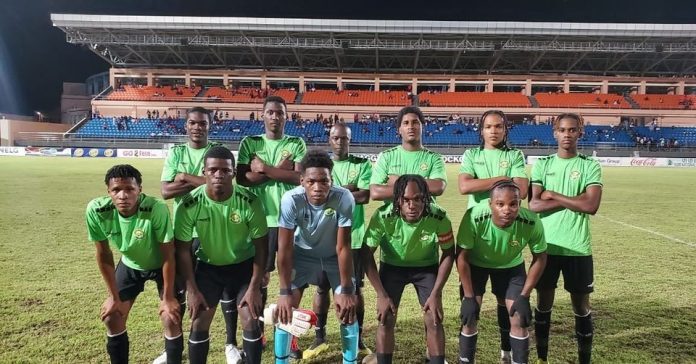 The River Road/ Darbeau based FC Camerhogne are the new champions of the popular Waggy T Super League. The Nixon Modeste coached outfit came from behind to defeat the hot favorite Paradise FC International from Saint Andrew by four goals to two.

It was a purposeful start to the match by Paradise scoring their first goal within the first five minutes of the encounter. That goal was converted by national player Saydrel Lewis and youth player Josh Isaac made it two nil to the delight of their partisan Saint Andrew supporters.

FC Camerhogne mounted their come from behind victory late in the first half. A goal from striker Rahim Stephen energized his teammates and fans in the lovely setting of the stadium. At the end of the first half, Paradise FC International enjoyed a 2-1 lead in what was an exciting and spirited 45 minutes of football.

Both teams went into the match, undefeated and boasting a proud record for being prolific goal getters. In the second half, it was the Camerhogne footballers who proved their worth, converting three more goals.

Kimon Marshall scored the first of the three second half goals which tied the game two all. Kwasie Theodore gave the Camerhogne the lead three one and Rahim Stephen silenced the once noisy Paradise fans scoring his second goal and the fourth for the Champions.

It’s the first major trophy and tournament victory for coach Nixon Modeste who formed the club less than five years ago. Modeste, a former Queen’s Park Rangers player, credited his team’s championship title to preparation and being focused.

Speaking to Modeste via cell phone he said his strikers throughout the season combined well and scored at a high percentage.

In the playoff for third place, Hurricanes defeated Sab Spartans from Saint Andrew three goals to one.

According to Modeste, his team’s championship title represents the first victory by a Saint George club in the Waggy T Super League. The 11 previous tournaments were all won by clubs from Saint Andrew, Saint Patrick and Saint Mark.