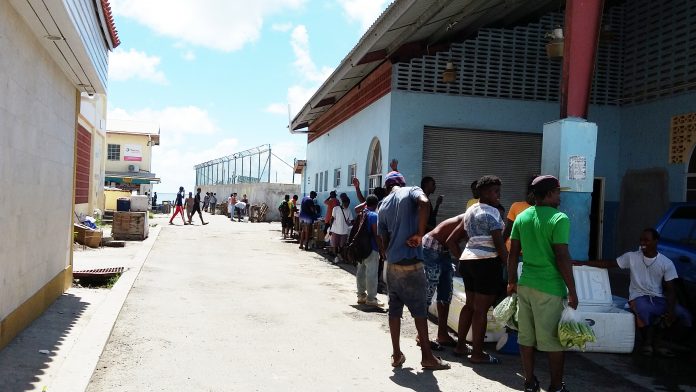 No mention of fisheries in the October 9 Throne Speech and the announcement four days later by Prime Minister Dr the Hon Keith Mitchell that the sector requires a “complete overhaul” has those within the industry wondering what next.

“It means that things are not right with the fishing industry,” Aldwyn Ferguson, president of the Gouyave Fishermen’s Cooperative Society told The Grenadian Voice on Tuesday, adding  “I’m not sure what the Prime Minister means though.”

Ferguson points to marketing as the “major problem” for the industry, and said any efforts to restructure or overhaul the sector must involve those who depend on the sea for their livelihood.

In his October 13 press statement about the state of the fishing sector, the Prime Minister said the “management system must change and we must ensure that there is a greater level of accountability. We know what the weaknesses are and we must take quick action to address those.”

The time is long overdue for the Ministry of Fisheries to “manage the resource, not the market,” says Toby Francis Calliste, fisheries officer for the Eastern Division.

Calliste, who has worked as a fisheries officer for more than 30 years, says managing fisheries resources must include regular stock assessments; something, he says, the Ministry has failed to do.

“If you do not do any stock assessment you do not know what you have out there,” he said, adding that the data collected at fish markets is not thoroughly analysed in terms of species and amounts. There are signs of decline as catches are smaller. Records show that fish landing at the Grenville Fish Market totalled 650,882 pounds from January to September 2019, compared to 408,245 for the same period in 2020. Every month in 2020 has shown a decline from 2019. The impact of COVID-19 and the lockdown was reflected in the biggest drop, which occurred in April 2020 when 17,738 pounds of fish were landed at the market, compared to 76,659 in 2019.

Nickolas Carlson, a 23-year-old fisherman from Soubise and a member of the Soubise Fishermen’s Co-operative, says he has noticed his catch has been getting smaller. Carlson, who loves to fish and has learned his trade “by watching” experienced fishermen, says he is not going out to sea as often. He usually heads southeast when fishing and has yet to face any difficulties from the sargassum seaweed.

Lately, he has opted to sell his catch directly to customers; setting up his cooler and catch on ice near the entrance to the Grenville Fish Market. He had previously sold to vendors; however, the demand is no longer there. When asked what would make his life better as a fisherman, he had one word “sales.”

In addition to inconsistent sales and fluctuating prices, fishermen – and fisheries officers – face chronic problems with cold storage, ice machines, pumps and other equipment. Calliste pointed out that ensuring the fishermen have sufficient ice on board is a priority, as fish deteriorates once it is caught. As a result, ice can be rationed.

The management of fisheries infrastructure is among the concerns of the fishing community. Ferguson has advocated that the Gouyave Fishing Complex and other facilities are not fully utilised and that fisherfolk should be more involved, making use of the buildings and equipment.

Outgoing fisheries minister Hon Alvin Da Breo had told this newspaper on September 18 it is his hope that public officers will show more dedication to serving the fishing community. “I would like to see them be more dedicated to the fishermen. Too often they pass the buck and blame others,” Minister Da Breo said.