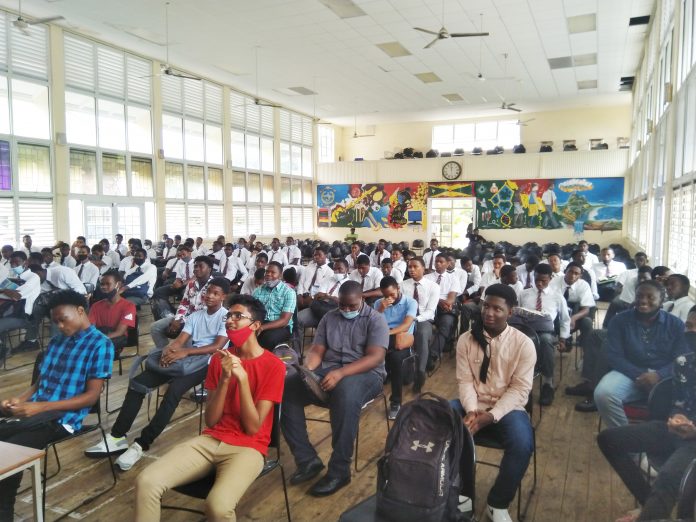 “You have all made us extremely proud, you have demonstrated the true spirit of the GBSS, you have made a very bold and loud statement that at the GBSS, we are indeed a great school.”

The pronouncement by Principal of the Grenada Boys Secondary School (GBSS), Phillip Thomas, to some of the 126 students, who were successful in this year’s Caribbean Secondary Education Certificate (CSEC) examinations. They were recognised at a ceremony at the school on Thursday (October 01).

Giovanni De Gannes, 16, is once again shining as he at

tained 18 subject passes with 16 grade ones, one grade two and one grade three, making his number of passes a first for Grenada. In 2018 he placed first in the local Brain Bee competition and went on to represent Grenada in the International Brain Bee, in Berlin, Germany, placing second to a student from Poland.

De Gannes was followed by 17-year-old Sékou Sam, who attained passes in all 16 subjects with 13 Grade Ones.

Principal Thomas said, “We have accomplished a feat that Grenada and the world will know that the GBSS is still a beacon, a rock when it comes to delivering quality education.”

De Gannes told The Grenadian Voice that from since Form One he decided to take on 17 subjects but added another by Form 4. He said he decided on 18 due to his indecisiveness in a career choice, as he wants to broaden his options. However, he has his eyes on Engineering or a career along the line of Particle Physics.

The top performer shared that preparation was intense as there were many classes sometimes up to 9pm at nights and many School Based Assessments (SBAs) to complete. He said the COVID-19 protocols made it even harder. Nonetheless, he expressed thanks to God for the strength and to his parents, teachers and friends for the support along the way.

The proud mother of Giovanni, Cheryl Gibbs, said her son is “naturally gifted.”

“It is very rewarding to see how he has performed to the end,” she said, noting that the journey was intense. She gave thanks to God for the results, stating that she prayed a lot with her son and advised him to do same when in difficulties.

Gibbs shared that she played her role by supplying his learning resources, assisted in downloading syllabi, encouraging him, providing healthy meals and supplements, helping him manage his time and transporting him.

Noting that only nine subjects could have been done during the day, the mother said she had to liaise with his teachers to get the other classes done at nights.

Initially she thought 18 subjects was too much but eventually she demonstrated faith in her son’s abilities and thought “it was important to give him a broad base so that when he makes a career choice then he will be choosing something that he actually loves.”

“We are very proud of him,” Gibbs said, noting however that Giovanni is a bit disappointed that he did not obtain all Grade Ones. She shared that they did request a review of the Caribbean Examination Council (CXC) because “he really started off with perfect SBA scores, we honestly believe that the grades that they gave him in that two subjects it wasn’t possible for him to get that. He doesn’t mess up exams and he will tell you how he did…he didn’t complain about any of his exams, he was confident, he was prepared.”

Challenging himself from the onset into secondary school, Sékou Sam said, “From the very first day I entered GBSS I knew that I wanted to set a standard so with that in mind I decided to try something that I have never seen done…16 subjects I thought that was a decent goal for me.” Adding that as the years progressed, he realised that his goal was achievable.

Sam said preparation was time consuming and he was forced to manage his time properly. He stressed that he had 100% support from his teachers, family and friends.

Noting that early in life he learned to balance academics and the sporting activities (Basketball, Table Tennis, Cricket, Football) he enjoys, Sam said he believes this prepared him for secondary school.

He is also pursuing Natural Sciences at TAMCC and intends to pursue a career path in Neurosurgery.

Sam advised other students to have fun but stay focused, noting that there are distractions, referencing social media. He shared that creating bonds with friends played a role in his success and told the other students that being able to apply what they learn will eliminate nervousness about examinations.

In advice to the current Form Fives, Rashard Francis and Jelsen Thompson, who both attained 14 CSEC passes urged them to not procrastinate, pay attention in class and ask questions.

Principal Thomas also urged them to take a page from the now former students’ book in that though the journey became much more difficult with the onset of COVID-19, they still excelled.

In 2019, the highest number of subject passes, 15, was obtained by one student whilst two students obtained 14 grade ones.