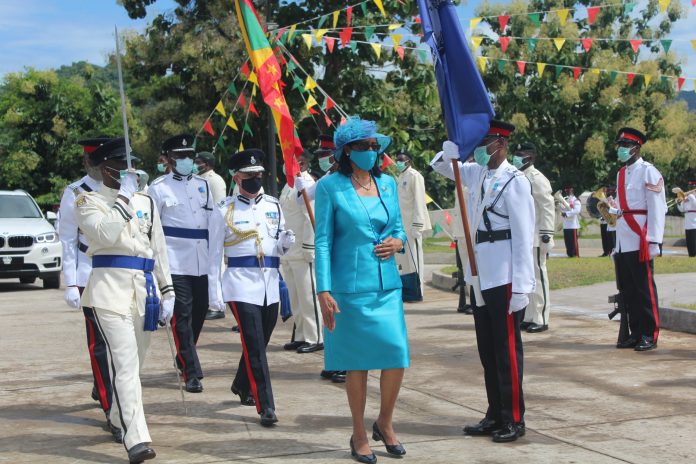 Job creation, maintaining fiscal discipline and building capacity for project implementation are among key priority areas of Government in 2021.

Governor General Dame Cecile La Grenade, in delivering the 2020 Throne Speech last Friday (Oct 09), noted that while the COVID-19 pandemic interrupted a period of solid macroeconomic performance in Grenada, it presented a window of opportunity to rebuild more resilient.

She said prior to the onset of the pandemic, Grenada was one of the strongest performing economies in the Caribbean region. Nonetheless, Government is projecting a strong recovery in 2021, with growth of approximately 6%, supported by a robust rebound in the construction and agriculture sectors.

Declaring the Fourth Session of the Tenth Parliament opened in “a time of unprecedented challenges,” the Governor General said the focus now shifts from providing relief, to getting citizens back to work.

However, she said “In the coming year, my Government forecasts a reversal of this temporary spike and expects further progress in driving the unemployment rate downwards [with] the implementation of various major local and foreign investment projects… My Government is confident that over 4,100 new jobs will be created next year.”

The GG reported that Government’s current project portfolio has a listing of 65 projects valued of over EC$500 million.

The Head of State informed that Government’s framework for policy implementation remains the National Strategic Development Plan: 2020-2035, listing the following Medium-term priorities as:

As it relates to Education, the key focus areas will include schools’ infrastructure, continued infusion of ICT within the school system, curriculum reform, and institutional strengthening of the education system, she said.

Citing the St George’s University (SGU) as a major contributor to employment and economic activity, the Governor General said Government is currently collaborating with SGU to facilitate a full return of all faculty and students in the shortest possible time. More so, she said Government will continue to support the education of students through various scholarships there and other regional and international universities.

In the area of Health, Government promises to continue to strengthen existing systems to sustain core health programmes, build resilience to respond to health emergencies, and transform the health care sector to better meet the needs of the people. Added to that, the Governor General stated that work will continue on developing an appropriate framework for a sustainable National Health Insurance (NHI) programme.

Further, with a commitment to address weaknesses within Government’s control, she said Government appeals for attitude adjustments where necessary, among the health care team.

Speaking to the tourism sector, which accounts for about 25% of Grenada’s Gross Domestic Product, and was the hardest hit by this pandemic, the GG noted that its rebound, along with the tertiary education sector, “is projected to be somewhat slower and will depend to a large extent on how quickly the global economy and travel industry recover.”

She pointed out that when global travel halted in early March, so did the tourism sector and this brought into focus three important considerations. “First, the need to ensure that the sector quickly adapts to the new realities created by the pandemic. Second, the need to diversify and expand our economic base. Third, the need to make the tourism sector more resilient to shocks to ensure a stronger and more resilient recovery. To this end, my Government will aggressively pursue policies, projects, and reforms to advance these and other priorities,” GG De La Grenade explained.

Citing the lack of capacity as a major constraint in project implementation, which is aimed at job creation, the GG said Government will take immediate steps correct this in various ministries/departments to maintain a target implementation rate of at least 85% in the coming period.

as it relates to investments, the Governor General reported there are over 30 local and foreign projects with a value in excess of EC$12 billion that are at various stages of implementation. These projects, she said cover tourist and student accommodations, medical tourism, manufacturing, agribusiness, and energy, will provide a major boost to the economy, including through the generation of approximately 4,700 construction jobs and over 3,300 permanent jobs upon completion.

Admitting that the COVID-19 pandemic has exposed certain gaps in Grenada’s social protection system, including the need for an unemployment benefit scheme, the GG said Government will continue to explore the feasibility of introducing such a benefit to protect workers during crises.

The Throne Speech was delivered to the Houses of Parliament, under the theme: 2020: Towards Vision 2035: Recovery, transformation and Resilience, at the Parliament Building, Mt Wheldale St George’s.