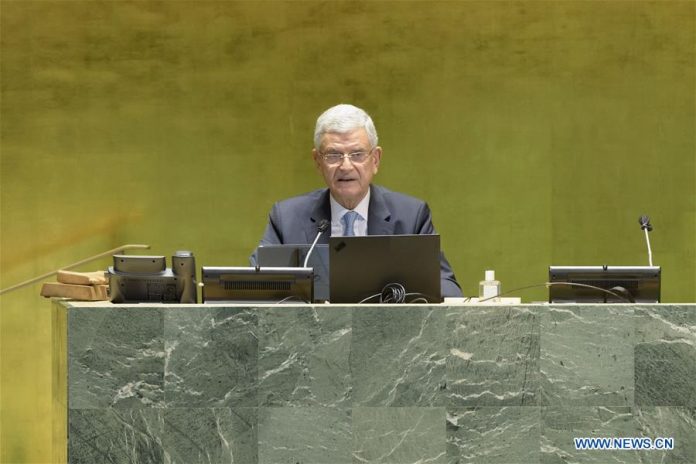 Calling on the United Nations to address the “urgent need for greater cooperation in combating this dreaded pandemic,” Hon Peter David carried out one of his final duties as Minister of Foreign Affairs.

Minister David delivered Grenada’s statement virtually to the 75th session of the UN General Assembly on Tuesday (September 29), after previously indicating at the September 22 post-Cabinet press briefing that the statement would be delivered by Prime Minister Dr the Hon Keith Mitchell.

When the UNGA convened on September 22, it marked the first time members did not meet in person.

Addressing the theme ‘The future we want, the United Nations we need: reaffirming our collective commitment to multilateralism – confronting COVID-19 through effective multilateral action,’ Minister David said “despite the best efforts of individual governments, like Grenada, this unprecedented global scourge has deep and lasting economic and social impacts on already vulnerable states.”

Even though Grenada has been able to combat the health crisis with a total of 24 cases and remains COVID-19-free, the Minister said success “was and is only possible through concerted action and stringent measures, which further exacerbate our socio-economic crisis. There is, therefore, an urgent need for greater cooperation in combating this dreaded pandemic and this reputable body is best suited to meet this challenge. COVID-19 impacts us all and we must work together as the failure of one link in our global chain to fight this pandemic affects us all.”

Minister David, also on Tuesday, took the Oath of Office during a ceremony at the Governor General’s Residence to assume duties as Minister of Agriculture and Lands on October 05. He advised the UN Economic and Social Council to “actively pursue undertakings that could create an encouraging atmosphere for Member States to have the opportunity to raise the standard of living of its people particularly in this pandemic period.”

As Grenada has done repeatedly over the years, the Minister reiterated support for the General Assembly Resolution 70/5, which calls for an end to the economic, commercial, and financial embargo imposed by the United States of America against Cuba.

“We call for an end to the Embargo against the Cuban people and we ask for continued solidarity and support for the Government and people of Cuba.”

When the meeting concluded on September 29, UNGA President Volkan Bozkir said “the fact that so many world leaders chose to address this Assembly is a testament to the power and relevance of the United Nations.”

Through their virtual presence, “our political leaders have demonstrated their commitment to multilateralism and the United Nations,” he said, adding that many recognise multilateralism presents the most effective system to address global challenges such as the pandemic and climate change.

“The call for solidarity is impossible to ignore in the context of the current pandemic,” Mr. Bozkir said, noting that every Member State referred to the catastrophic consequences of this disease in their remarks.

“Unilateral actions have failed to halt its spread. Significant efforts are needed to combat the current pandemic and prepare for future health shocks,” he warned.

The UNGA president also warned that the pandemic has diverted resources and attention. “But climate change is still the greatest long-term threat to humanity,” pointing to sea level rise, wild fires and loss of biodiversity.