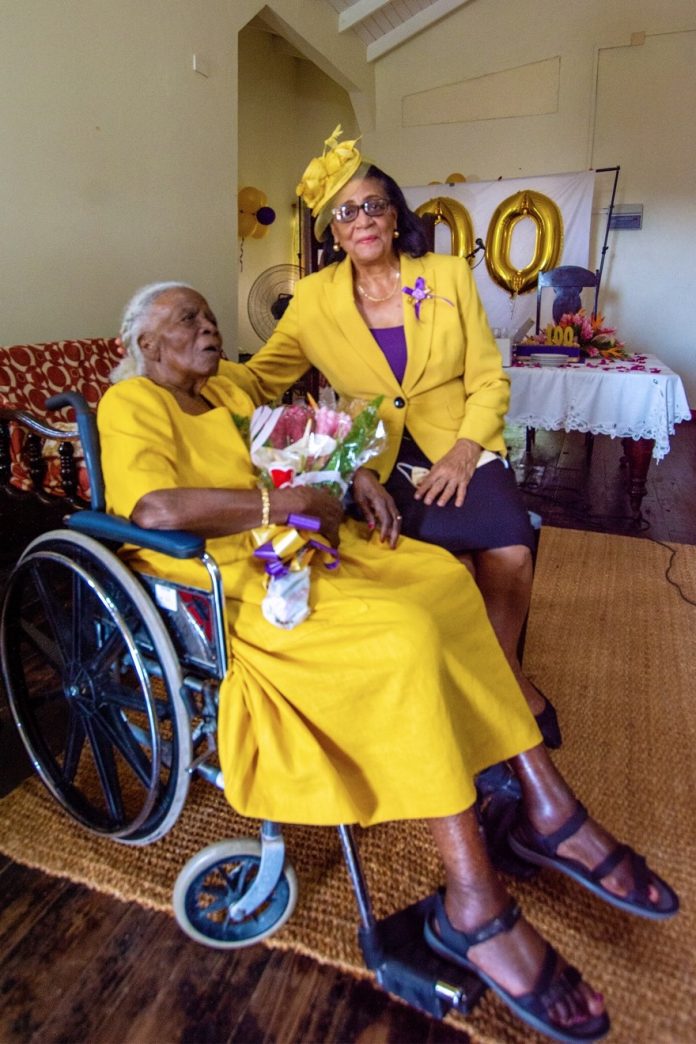 Ms Collins, part of the Darbeau/George family of Hermitage, grew up with a Darbeau grandmother in Saint Patrick who spoke mainly the Grenadian Creole language known as Patois.  Her mother’s Hermitage lot was just across the road from what is now the home of the Grenada Chocolate Company.

In the 1940s, Helena Dorothy Edwards, as she was then known, migrated first to Trinidad and then to Aruba, where she married another Grenadian, John Garfield Collins.  Along with others from Grenada, including her lifelong friend Helen Charles (whom some may know as Ms. Daddy, of Tivoli), Edna and Garfield, as they were known by friends, were migrant workers at the site of the Lago Oil Refinery in San Nicolas, Aruba.

In 1950, after giving birth to her first child Merle, they returned to Grenada because Garfield was “laid off” from his job and the site did not allow women to continue working if husbands were gone.  In Hermitage, they built a house on her family lot where her second child Keith was born. In 1957, they moved to Morne Delice, Saint David and she gave birth to her last child Michael.

A fabulous storyteller, she excited the imagination of her children, particularly her daughter Merle, who, in her own work as a distinguished poet and short-story writer, has recrafted many of her mother’s stories about Grenadian life.

In the 1960s, when her children were at high school in Saint George, Ms Collins moved there, started a boarding house, and, for a number of years, housed various young people, including members of her extended family.

By the end of the 1960s/beginning of the 1970s, she returned to Morne Delice.  In the 1980s, she moved to New York and remained there until the early 1990s. In the early 2000s, she lived with her son Keith in New York and with her daughter Merle in Maryland.

She now lives in Morne Delice, with caregivers who see about her daily needs.  Governor General H E Dame Cecile LaGrenade visited Ms Collins for her birthday on September 22.

During the celebration of her 100 years of life, Ms Collins said, things are “not always 100%;” but she continues, when she can, to tell stories about her life in Grenada through the last 100 years.