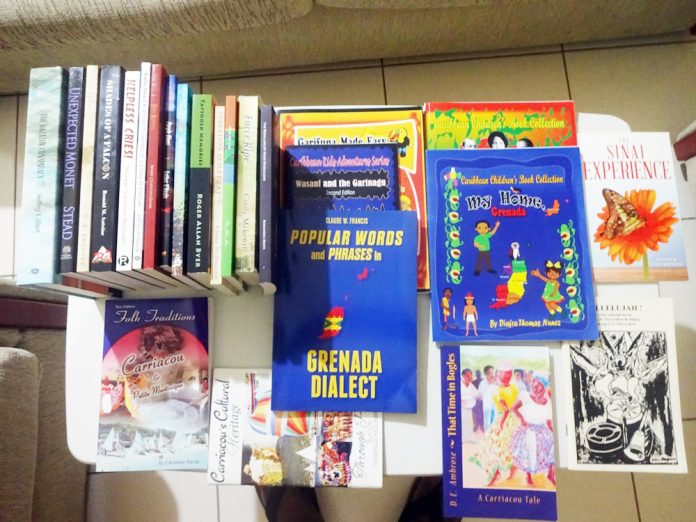 Introducing students to Grenadian books through school curriculum and providing concessions for authors are among the objectives of a group of published writers.

The group of 11 writers has been meeting over the past three years “to discuss things of a literary nature and the literary scene in Grenada,” published author David Ambrose told The Grenadian Voice on Wednesday.

The group is also working towards formalising what is expected to become the Grenadian Published Authors (GPA).

Among the biggest hurdles for authors are “recognition and exposure” and the fact that Grenadians do not read enough.

“When I was in secondary school in the eighties reading was a huge thing,” Ambrose recalled.

Greater recognition and exposure can be attained by incorporating appropriate Grenadian literature into the school system and ensuring more books are available in public libraries and on the shelves of bookstores.

Roger Byer, one of Grenada’s most established authors and a member of the group, says there are so many talented writers here who need encouragement and exposure.  His first novel ‘Tattooed Memories: Under the Canopy of the Vietnam War’ was published in 2014; and a collection of short stories ‘Granny’s Bathroom and Other Short Stories’ was published in 2017. Both took years to complete with plenty of rewrites and edits.

“I learned as I went along,” he recalled, emphasising the importance of talking to people and checking facts.   Although his books are available on Amazon, getting books into the hands of more Grenadian readers requires some improvisation in sales techniques.

Byer, who has found much success using Facebook, also “carries books in the trunk of my car.”  In 2019 he sold about 100 copies from his trunk.

Several Grenadian authors participated in the inaugural Caribbean Literature Day, a virtual event that took place on July 12 under the theme ‘Celebrating Caribbean Literature: Roots, Range and Excellence of Writing’ and encompassed all languages spoken in the region.

“What we did in Grenada was part of a regional effort,” Ambrose said, noting that Grenadian authors shared video recordings, pictures of books and book covers.

While the virtual event provided worldwide exposure, Ambrose, who teaches Communication Studies at the TA Marryshow Community College, pointed out there is no Grenadian novel on the primary or secondary school English Literature curriculum.

Most Grenadian authors have books published abroad and face duties and other taxes when importing books into Grenada. In 2018, when Ambrose brought in copies of his publication ‘That time in Bogles: A Carriacou Tale’, he applied for concessions.

“I was the last person to get that concession,” he said, adding that he expects the issue of concessions will be addressed once the authors’ group is formally registered.

He said the group is also calling for the re-opening of the Public Library in Saint George’s.

“All the books and materials are still in there,” he said of the stately Georgian structure, which has been closed to the public for several years.

This newspaper could not verify his statement on the content of the Sheila Buckmire library since we were told in the past that most of the books were safely stashed.