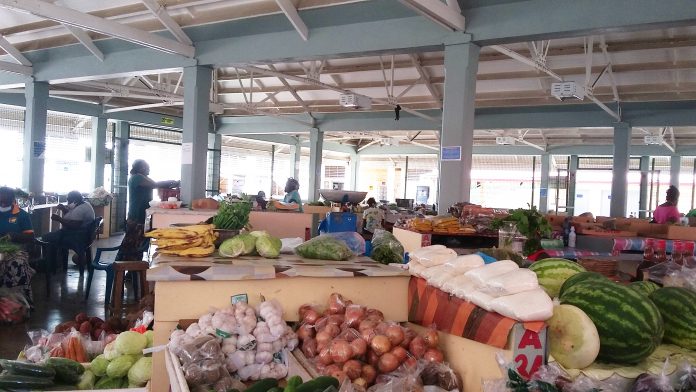 It’s Saturday morning (June 13) and the tables in the centre of the Grenville Market Square are once again covered with fresh fruits, vegetables, provisions and other Grenadian products, imported garlic, potatoes and onions. Properly spaced vendors wearing masks and other face coverings are ready for customers.

Many of the daily vendors have returned and are “naturally spaced out” while those who operate from the market on Fridays and Saturdays have been reduced from 70 to 30 for social distancing requirements, according to general manager Hudson Codrington.

The market opened for business “within the guidelines of COVID-19 effective Friday June 05,” as announced on June 12 by the Ministry of Infrastructure Development and Implementation.

“Vendors who sell on Friday only, Saturday only or Friday and Saturday only, must call the office at 442-5322 before going to the market on those days to ensure they can be accommodated at the weekend section of the market. This has become necessary as a result of the limited space,” the Ministry stated in its June 12 press release.

In addition to vendors who sell fresh produce and other agricultural products, the Market Square is home to many small businesses. When the facility opened in 2014, some vendors who previously operated on the streets and other locations, including the Grenville Vendors Mall, began renting the booths. Some have been there since 2014, others more recently. Prior to COVID-19 and the lockdown, 87 of the 90 booths were occupied.

The booths that are now open – about one third of them – are brimming with a variety of clothing for women, men and children; hair products; jewelry; shoes and many other items. Codrington said renters are “taking their time about opening.”

There is a sense of frustration among some of the renters with clothing shops on the upstairs level of the two-storey building, all of whom chose to remain anonymous when speaking to The Grenadian Voice.

“This place is dead too much,” said one owner who often has to supplement the monthly shop rent of $300, as well as pay for electricity.

“It will take you a long time to make $100 upstairs,” said another sales person.

The problem, they believe, is lack of promotion of what the Market Square has to offer the public. In addition to “collecting rent” and maintaining the facility, they see a role for the Ministry of Infrastructure Development and Implementation in promoting the market and its products.

Codrington said Government “is not in the role of running private businesses.” Previously he brought in representatives of media outlets to meet with the shop operators about collective advertising packages, as well as an official from the Ministry of Cooperatives to discuss the benefits of a co-op.  Regrettably, he said, “petty squabbles” intervened. In the words of one of the operators “the thing fell apart.”

Now, with the economy beginning to show some life and the prospect of Grenada’s border possibly opening on June 30,  those who rent booths in the Grenville Market Square are looking forward with hope.

“It’s safer on the street. We want to be able to go back out on the street on Fridays and Saturdays like before the lockdown,” one owner said, referring to George the Fifth Street on the north side of the Market Square, “so customers will know we are here.” Prior to the lockdown, the street was closed to vehicular traffic for the two days with some operators selling from one side of the street.

Codrington cautioned that “people are hesitant, they are still scared” of the coronavirus. He expects sales may increase in July and August, and has security in place should there be an influx of people; something those renting the place would welcome, masks and all.

The Grenville Market Square was constructed with funds from an $11-million (US) Caribbean Development Bank loan to Grenada, with counterpart funding of $2 million (US) from the government, for the renovation of the existing market square, construction of a bus terminal in Grenville a new abattoir. The loan was approved in 2012 and the market officially opened in 2014 with a “low key” ceremony and blessing, according to one observer. The abattoir is located in Mirabeau.

One renter, who has operated a business in the Market Square for five years, said it is time for a “real grand opening. The whole place has to be blessed,” she said.