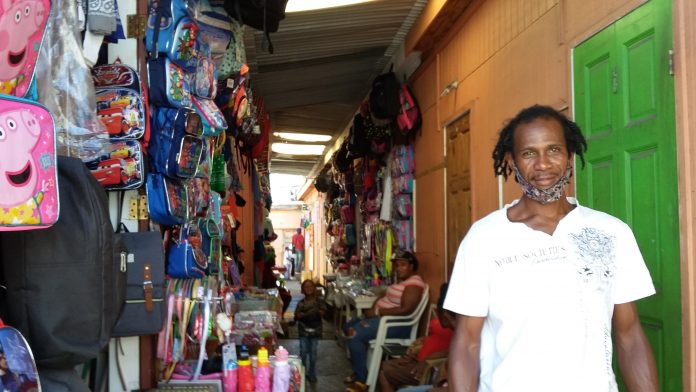 Knowing their location is temporary; business operators in the Grenville Vendors Mall anticipate yet another move.

“No one has spoken to us. We continue to do what we do as normal,” Davis Joseph, president of the 20-plus members of the loosely-knit group, told The Grenadian Voice in an interview on Saturday morning (September 29), as he opened his shoe and leather repair business for weekend customers.

“We know we will have to move. We have known for some time what will be taking place,” Joseph noted, as the bidding process started in August for the construction of the Grenville Commercial Complex, which will have a direct impact on the vendors.

As to where the vendors will be relocated, The Grenadian Voice has learned that negotiations are ongoing between the Ministry of Infrastructure Development and the Grenada Cooperative Nutmeg Association (GCNA) to possibly have the vendors move into an area within the GCNA compound in Grenville.

“They (Ministry officials and the GCNA) have been in discussion for a while,” according to an observer, who chose to remain anonymous. GCNA reportedly has “no objection” to the vendors operating from an area of the compound that provides some shelter and was used in past years as a temporary location for fruit and vegetable vendors. Discussions between the Ministry and the GCNA are focussing on the potential terms and conditions for an agreement, such as rent and duration, according to the observer.

Business has brightened somewhat for the vendors operating out of the small booths and umbrella-covered spots in the narrow alleyway between Victoria and Ben Jones Streets, as the economy reopened, along with back to school purchases and loyal customers. When asked where he would like to see the vendors relocated, Joseph suggested the area behind the Grenville Bus Terminal, on the seaside.

“It would have to be on government property. They could put up some temporary covering,” he suggested.

This idea, while “plausible, is unlikely to happen,” according to the observer, who said on Monday that government will eventually hand over operations of the Grenville Bus Terminal to the Grenada Ports Authority (GPA); hence, would “not want to invest more or change” what now transpires at the facility.

Ian Evans, GPA port manager at the Pier, confirmed to this newspaper that the Authority is in discussions with the Ministry of Infrastructure Development on the matter of the Grenville Bus Terminal and intends to manage the Grenville facility much in the same way as it manages the terminus in Saint George’s.

While they await formal notice from the Ministry of Infrastructure Development as to how long they will be able to operate from the mall, where they pay a daily $1 fee plus electricity, the vendors continue to operate knowing their location remains temporary, as it has for those who, like Joseph, have been there since it originally opened in 2003 and revived after a fire in 2010.

Minister of Infrastructure Development Hon Gregory Bowen announced on September 01 that seven contractors were shortlisted in the bidding process for the Complex and a location was being sought for the vendors operating from the mall.

The Grenadian Voice sought clarification from the Ministry on Tuesday as to the status of the bidding process, but had yet to receive a response at press time on Thursday.