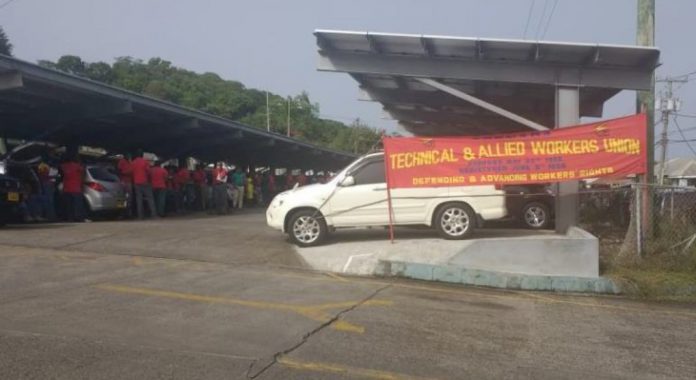 Members of the bargaining unit at the island’s lone electricity company, GRENLEC, and representatives of the Grenada Technical and Allied Workers Union (GTAWU) wrapped up a meeting with the Minister of Labour Hon Peter David and GRENLEC’S management on Thursday after two days of discussions.

The discussions centered on the issue of workers being forced into vacation leave when the country was on a national lock-down period as a result of the COVID-19 pandemic.

General Secretary of GTAWU Andre Lewis said that move was illegal. Lewis said that vacation leave which is acquired after one year on the job, seems to be in jeopardy this year. “The workers did not stay away from the job on their own accord, it was the Government’s decision to close down the country. This should have nothing to do with workers’ vacation which is in place for rest and relaxation. How can one rest when he is virtually in prison?”

While not giving details, The Grenadian Voice was told that the union has accepted the Minister’s recommendations and was engaged in discussion with the workers up to late Thursday.

However, it is not clear as to when the workers will be back on the job, wearing GRENLEC’s uniform.

The protest action started last week with workers in the bargaining unit wearing their red union T-shirt in place of GRENLEC’S uniform. This led to the management threatening to send workers home to change their clothes and also promised to deduct monies for the time off the job.

After meeting with the management later in the week, GTAWU sought permission to meet with the workers on Monday morning to update them. That meeting saw the workers again wearing their red T-shirts on the compound. This newspaper understands that the meeting went on for the entire day.

Shop Steward Richard La Touche said that the workers started their off the job protest on Tuesday; so they were once again seen on the Dusty Highway compound while they awaited the outcome of the meeting with the Minister.