GUT says no to government’s request 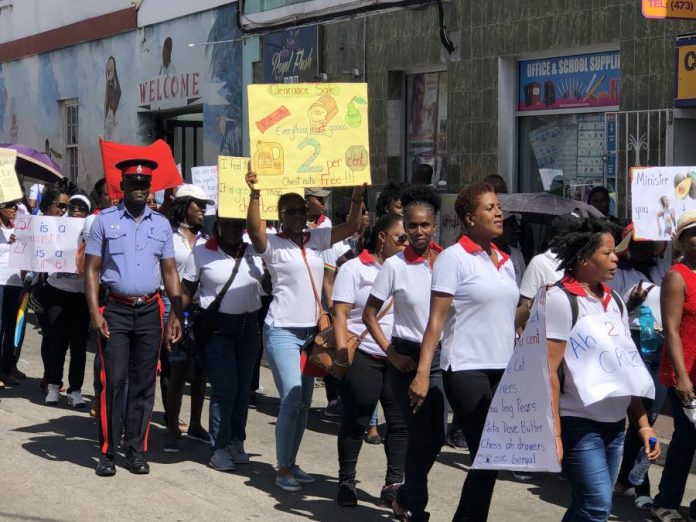 The Grenada Union of Teachers (GUT) says no to government’s request to defer the 4% salary increase due in January 2021.
According to the Head of the Government’s negotiating team, Hon Oliver Joseph, the request is based on a fall in government’s revenue due to the effects of COVID-19.
Joseph told The Grenadian Voice that government is collecting 50% less revenue, resulting in a budget deficit.
He said a time-frame for the deferral was not provided but if it’s agreed to be for one or years, the payment will be retroactive “so they have nothing to lose.”
Minister Joseph said he wrote to all unions representing government employees explaining why Government is unable to pay the increases totalling $13.2 million in 2021. “Government cannot increase the wage bill by $13.2 million,” he said.
Following the presentation of the 2021 budget by the Minister of Finance Hon Gregory Bowen, Prime Minister, Dr the Right Hon Keith Mitchell said government did not ask the unions to forego the payments “but to defer meaning we are agreeing that as soon as things improve [we can make payments] and the estimate [of the economy’s recovery from the effects of COVID-19] is that by 2022 we will see [improvements]. It means we will have some serious back payments to give them.”
The Prime Minister said government is not shying away from the payments as it has already signed the Collective Agreement, committing to the payment. “We are not asking people to don’t expect payment,” he said.
However, GUT President Marvin Andall, in a statement, said according to the law of sowing and reaping, “government should not expect to plant the seeds of contempt and vindictiveness and reap the fruits of cooperation and goodwill.”
Reflecting on the occurrence two years ago when government deducted “huge” sums from the salary of teachers and other public officers when they took industrial action over the reinstatement of pension, Andall said “this illegal and cruel act caused us much pain and hardship. But we survived.”
He added, “Therefore it should not be too difficult to understand why teachers are saying an emphatic no to the government’s request….”
He noted that the struggle to reinstate pension for public officers continues as they await a court date.
President Andall reminds members that the Work-to-Rule continues since government has yet to return the docked salary, adding that it continues until the monies are returned or the GUT members vote for it to end at a general meeting.
Meanwhile, the National Democratic Congress (NDC) in its weekly ‘Heartbeat’ article has joined the call “on the government to extend an olive branch to bring an end to the contentious wages deduction of 2018” saying that “The best way to mend fences, is to refund all docked salaries and abide by the 4% salary increase negotiated and agreed for January 2021.”