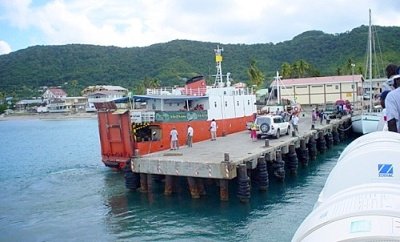 Business owners in Hillsborough, Carriacou are said to be operating at a loss. This was revealed by the Leader of the Opposition, Tobias Clement as he appeared on his regular Tuesday morning radio slot.
Clement said the movement of the port operations to Harvey Vale has created a strain for a lot of people by slowing down activities in Hillsborough. “The business owners in Hillsborough are suffering. They say Hillsborough which has been like the capital, is now becoming a ghost town and things are slow.”
This was confirmed by a business owner who, for fear of being victimized, would like to remain anonymous. The owner said that more the small businesses are suffering. “Those that sell little food and thing and have a bar, have almost no business going for them. It could have days when they do not get any sale. Also VAT is killing us with the Government asking us for 15%.”
The business owner, who is concerned about the future of the multi-million dollar investments in Hillsborough, said the only little activity on the old jetty is when people are travelling to and from Petite Martinique. The movement of the jetty in 2019 has caused a drastic change for them.
But the owner of a guest house in Harvey Vale said that since the movement of the jetty, his business has grown. “I am right here near the new jetty, so most times people come for a room walking with their bags,” he said.
It was in 2015 that the announcement to move the jetty was made public by the then Government Minister Elvin Nimrod.
He said that the new location will be in proximity to an existing marina and will bring new opportunities for employment and increase tourism.
The decision, Nimrod said, was based on the deteriorated condition of the jetty in Hillsborough which made it unsafe.
He also told business owners in Hillsborough that government was planning specific programmes and projects “to keep Hillsborough a buzzing town.”
Clement is concerned that the movement of the jetty can bring added expense to corporate citizens.
“Because with the moving of that port you now have to get transportation for goods and services from Harvey Vale to Hillsborough. Then you have now the activities that used to be in Hillsborough that are not there anymore,” he said.
The Opposition Leader wants Government to meet with the business community. “So that an amicable conclusion can be had. Businesses in Hillsborough are operating at a deficit,” he said.
He is suggesting that if the jetty is made worthy of operating again, it will be like a stimulus package to the business community in Hillsborough.
The Grenadian Voice awaits a response on the issue from Hon Kindra Mathurine-Stewart on the promised projects and programmes for Hillsborough. She is the Government representative for Carriacou and Petite Martinique.