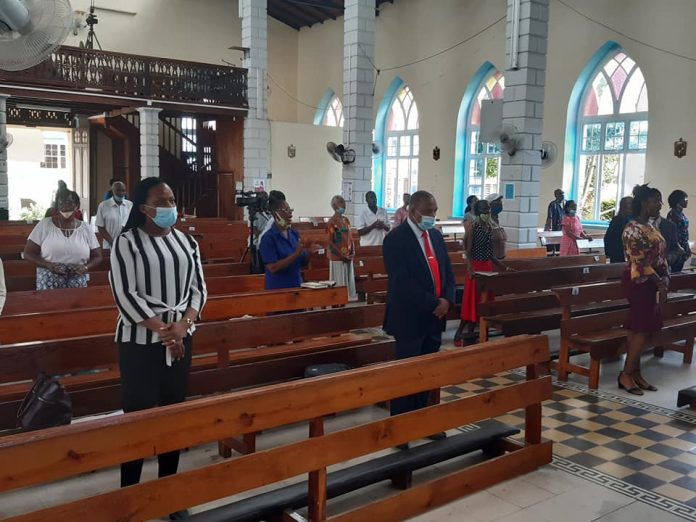 The coronavirus pandemic saw June 29 pass without the widespread traditional celebrations that the date usually inspires. Observed by some churches as the birthday of St. Peter, patron saint of fishermen, June 29 is a day to honour the fishing community. This year, the day was marked with a visit by Minister responsible for Fisheries Hon Alvin Da Breo to Gouyave, where members of the fishing fraternity were honoured.

“Gouyave was the first of my visits,” he said of plans to visit all fishing centres. The Minister participated in a church service at the St. Peter’s Catholic Church and the blessing of the boats coordinated by the Gouyave Improvement Committee; then shared hampers to needy fisher folks in the Parish of St. John.

As the community looks to life with COVID-19 and what the pandemic is doing to fish markets in Grenada and abroad, several suggestions and grievances have emerged.

When asked what he wished for fishermen looking ahead, Augustus Williams, president of the 140-member Soubise Fishermen’s Co-operative, had three ready answers. “Fishermen need better markets, we need better storage and we need to get back our gas rebates.”

The co-operative has instructed its lawyer to write the Ministry of Fisheries inquiring as to why some fishermen receive the gas rebate three or four times a year, while others have never received the rebate.

Registered fishermen who purchase gas and pay duty are eligible to have the duty rebated once a receipt is submitted. When they purchase gas on the jetty, the duties are not applied. According to Williams, there are instances when the rebate is denied.

“We want to know why this is happening, if there is any ‘curry favour’ taking place,” he told the Grenadian Voice.

The lawyer is working on behalf of the co-op, but the failure to pay some fishermen the gas rebate “is happening generally,” he said.

Craig Alexander, president of the St. Patrick’s Fishermen’s Association, wishes there was a functional and effective national organisation to lobby on behalf of all fishermen. There are approximately 2,300 registered fishermen in Grenada.

“We need a stronger voice,” he said, adding that despite all the efforts of co-ops and other groups “we do not have a national body to speak on our behalf.”

He is wishing too that the “authorities” would follow up on his reports about how some fishermen are using illegal nets. For years, he said, he has reported the sale and use of one-inch net for fishing jacks.

“That is banned. It is supposed to be one and one quarter inch,” he said, explaining that by using the one-inch net the smaller jacks are being caught.

Minister Da Breo said he intends to look into the matter.

“The economy has really taken a downturn. It doesn’t make sense to go out every day,” he said, because the market is not there for the fish.

“The vendors are crying out too. People want fish but the money is not there.”

He added that the sargassum seaweed is causing trouble for fishermen, particularly in the Soubise area.

The possibility of commercial flights allowed into Grenada gave Johnny Regis, general manager of the Southern Fishermen Association Inc., some hope for more exports; but, that was dashed by the announcement on Sunday (June 28) by Prime Minister Dr the Hon Keith Mitchell that only charter flights will be permitted.

Regis says the local market is “harder” because the spending power of Grenadians has been negatively impacted by COVID-19.