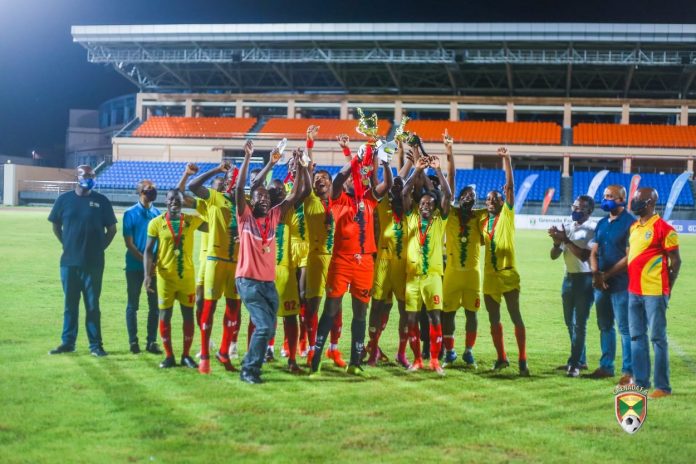 The Pride of Saint Mark Sport, Hurricanes, are the winners of the Grenada Football Association (GFA) Club Championship and a cheque for $30,000.

The two teams, which emerged from their respective semifinal matches with well-earned victories – Hurricanes twice defeated neighbors Hard Rock from Saint Patrick and Fontenoy by the same margin against Sab of Saint Andrew – looked composed and competitive for the first 15.

However, it was Hurricanes playing the more attacking and aggressive game that penetrated Fontenoy defense, scoring in the 20th minute of play through a clever Ryan Alexander, who within the penalty area, deceived the advancing goalkeeper.

In the second half, it was a re-energised Fontenoy who took the challenge to their opponents, pushing the ball forward with much purpose and aggression, putting pressure on the Hurricane defenders and eventually Ruel Andrew converted to make score two one.

Fontenoy intensified the battle and like Hurricanes in the first half created several close ranged scoring chances but failed to put the ball into the net. In the final 15 minutes, Hurricanes, who substituted three of their starting players, regained control of the game. In the 78 minute Kriston Julien scored their third goal which seemed to break the spirit of the Fontenoy team.

In the third place play off, Hard Rock defeated Sab, three goals to one and collected a cheque of $5000.

The presentation ceremony was held immediately after the final, with representatives from the sponsoring companies presenting awards to the respective winners. Hurricane made almost a clean sweep of the individual titles: with Shadai Mark securing best goalkeeper, and Kriston Julien securing the golden boots with nine goals each and Lemoy Augustine going home with MVP of the tournament.

In the coming months are the Pure Grenada Cup and Waggy T Tournaments.