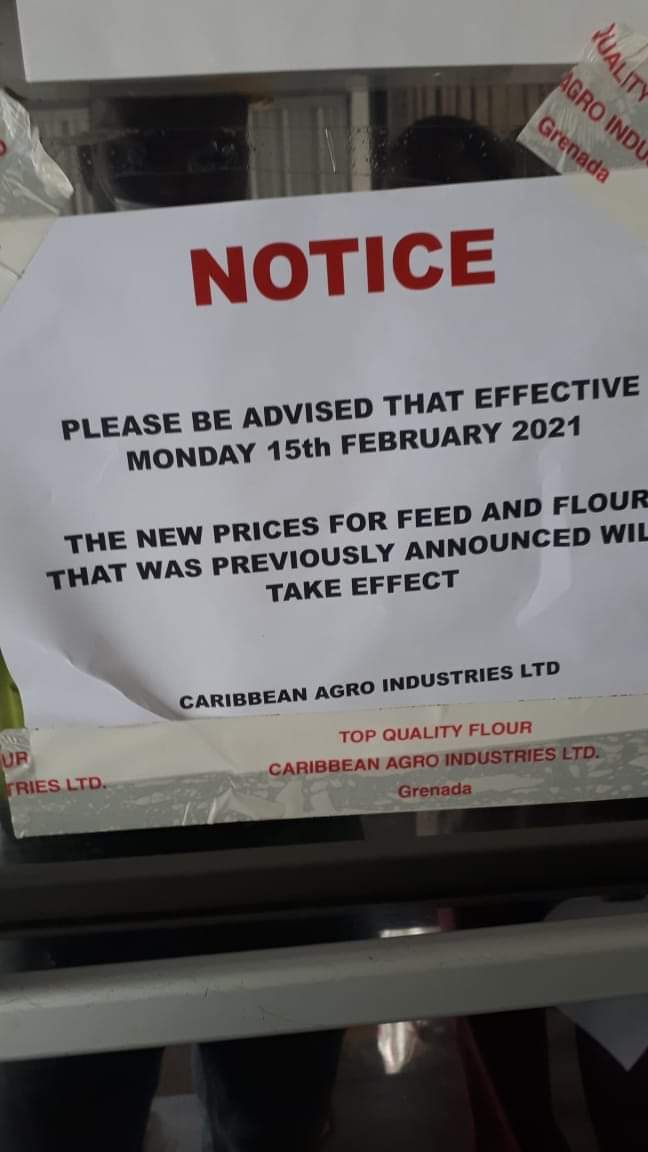 The impacts of these global forces are being felt by farmers and consumers alike. This was evidenced when ADM Caribbean Agro Industries posted the new price schedule at its Mt Gay location on Monday (Feb 15). The price of poultry feed increased by 6%, pig feed by 12% and all other feeds by 16%; additionally bakery flour increased by 10% and counter flour by 12%. The new schedule was originally announced to take effect on Feb 03, but was postponed following a Feb 10 meeting with the Minister of Agriculture Hon Peter David and officials from the Ministry of Trade, Industry and Consumer Affairs.

Jason Phillip, president of the president Grenada Association of Poultry Producers, said the new schedule represents a sudden 6%-increase in feed costs; hence farmers had no choice but to increase the per pound price for local fresh whole chicken from $5.50 to $6.75 and for a tray of 30 eggs from $20 to $23 as of Feb 15.

“The last increase in the price of feed on January 16, 2019 saw farmers yet again absorb this and not pass it on to the consumers. With this premise, it is not feasible for farmers who have to ensure the viability of their farming business, to absorb this latest price increase,” Phillip said on Monday.

The trickle-down effect from higher input costs for farmers will see those increases reach grocery shelves. Some poultry farmers have written contracts to supply grocery stores, while others have verbal agreements. Iris Stephens, purchasing manager of RealValue IGA Supermarket, said there is no final decision yet on implementing the higher poultry prices.

“We know what this means to our farmers and our customers,” she told The Grenadian Voice on Wednesday.

“We will sit down with our farmers” to determine the next step.

The Country Cold Stores Ltd, which imports frozen meat products from the United States, Canada, Brazil and, to a lesser extent, the United Kingdom, is also dealing with higher priced imports, as livestock farmers in those countries face increased feed costs. Cisley Gabriel, general manager, said some products, such as different cuts of pork, are also difficult to source due to COVID-19 outbreaks among workers at meat packing plants.

Noting that feed costs account for 60% of production costs, it is incumbent on government to intervene, according to Phillip, who noted this recent price hike represents an overall 16%-increase in feed costs during the past decade, while farmers have not increased wholesale prices during the same period.

“We continue to monitor the unfolding situation as we await government’s official response,” he said.

Minister of Trade, Industry and Consumer Affairs Hon Alvin Da Breo told this newspaper he has requested a legal review of the 1977 agreement that established Caribbean Agro and which gave the company several advantages. Some industry observers say the agreement establishing Caribbean Agro needs serious attention regarding tax exemptions and duties; the company’s ability to import raw agricultural materials without government’s consent; and the commitment by government and the company to establish a vertically integrated poultry industry for the purpose of making Grenada self-sufficient in poultry meat and eggs.

In some instances, vertically integrated companies control marketing, make the management decisions and commit farmers to production levels through contracts.

Whether it is vertical integration or another type of marketing and ownership, the goal of making Grenada self-sufficient in poultry production will require some form of partnership that brings all local producers together, according to Gabriel. While Country Cold Store has purchased meat from local producers, the lack of volume and consistent supplies are hindering.

She explained that the company can purchase 500 pounds of local chicken, sell it within a week but then has to wait another two months before 500 pounds are available again.

“We are always willing to support our local farmers. If they came together as one source, that would benefit all the farmers,” she suggested, noting that access to adequate volumes would mean the company could buy more local.

Minister Da Breo had told The Grenadian Voice on February 9 that upon learning of the intention by ADM Caribbean Agro Industries to increase prices, government advised the company there is a procedure for increasing the price of controlled products, which include flour and feed, and that the company submit details outlining why the increase is required.

ADM had cited reasons for the increases as soaring grain prices, declining production in grain growing countries “coupled with generally high levels of demand, particularly by China as it now seeks to rebuild its hog herd…”

The Food and Agriculture Organisation (FAO), in its most recent Cereal Supply and Demand Brief on Feb 04, reported that world cereal stocks stand at 802 million tonnes, down 64.3 million tonnes from December and 17.8 million tonnes (2.2 percent) from their opening levels and the smallest in five years.

“The year-on-year contraction stems from a massive downward adjustment to maize inventories in China, which are now pegged at around 139 million tonnes, down nearly 54 million tonnes from the December forecast and 11.6 million tonnes below their opening levels. In addition to China, FAO forecasts for maize inventories in Argentina, the European Union, India, and, most significantly, the United States of America, were also trimmed since December,” according to the Cereal Supply and Demand Brief.