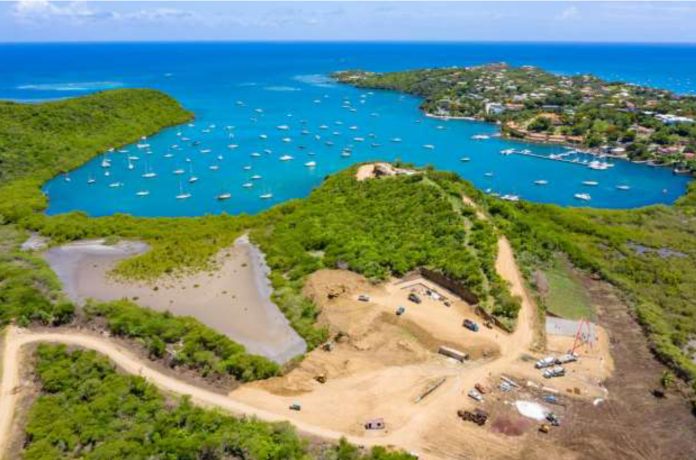 Mt Hartman is, once again, the site of a proposed multi-million dollar tourism attraction.

Newly named The Hartman Resort Grenada, the Government Information Service (GIS) reported on August 31 that the project, under the Citizen By Investment (CBI) programme, has a new developer and management team to continue the development and enhance the area.

CBI Chief Executive Officer Percival Clouden, speaking on the GIS program, said the $2.9 billion (US) project will be executed in four phases over 10 years, and will involve a “different configuration” from the original development. He did not clarify which original development the investors are using.

Minister of Infrastructure Development Gregory Bowen told reporters on Tuesday that the new investors are only now turning to the possibility of utilising the CBI programme because of COVID-19 and a possible downturn in financing.

“But the first component, a significant component of the money is not from CBI,” the Minister confirmed.

There have been previous attempts to develop the area, the most recent being by a Chinese investor who came under scrutiny by American authorities for fraud. There was an earlier move by Four Seasons Hotels to develop the area, which eventually failed. In 1996 the government had declared the area the Mount Hartman National Park and identified habitat for the endangered Grenada Dove.

Concerns for Grenada’s national bird and other wildlife, as well as the natural habitat exclusive to the area, have emerged when proposals for development are made public. The Grenada Tourism Authority promotes the Mt. Hartman Dove Sanctuary as the home of the protected Grenada Dove and refers to the “unique dry thorn scrub eco-system.”

Clouden stated on the GIS programme that the investors “are going to preserve the nature part of it, which, I understand, there are species of birds that habitat in that area and they are going to ensure that is preserved,” he said, adding that the investors are “now in the process (of) engaging in an environmental study” and the habitat will not be destroyed.

BirdsCaribbean, an international network dedicated to protecting Caribbean birds, has called for the “immediate cessation of destructive activities of critical bird habitats and ecosystems,” pending the completion of proper Environmental Impact Assessments (EIAs) and approvals, mitigation plans, and full and transparent consultations with stakeholders for Mt. Hartman, La Sagesse and Levera.

Clouden said the investors “already have an approval because it is a continuation under a new developer, new management, and new investors. So, they have begun work,” he revealed. The Grenadian Voice has learned that there has already been some clearing at the site to accommodate workers.

In addition to jobs during construction and permanent hospitality employment, Clouden said the project includes a marina, and now is the time to train more young people in that industry as it provides “a solid foundation” for employment.