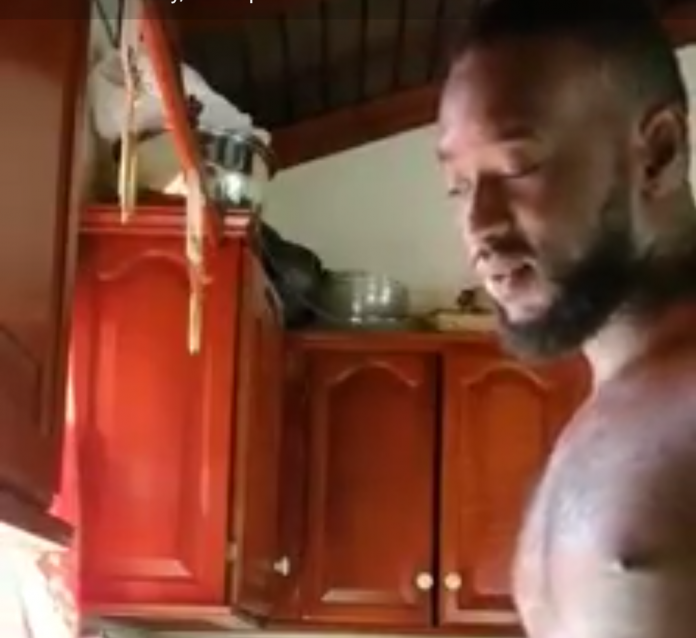 Police have charged a Saint Andrew man in connection with a video released via social media.

Shaundel Gordon, 35 years, Self-Employed of Canal Road, Grenville, Saint Andrew was arrested and charged on Wednesday July 01, 2020 for the offense of Threatening Language, with intent to provoke another person to commit a breach of the peace, contrary to Section 133(a) of the Criminal Code, Chapter 72(A) Volume 4 of the Continuous Revised Laws of Grenada.

The Grenadian Voice was reliably informed that the video showed a half-naked man sharpening a cutlass in what seems to be a kitchen while venting his disgust on the recent Fort Juedy incident where a man was beaten by a family for the death of their dog.

He called for justice for the victim Evan Smith.

In explaining his anger, the man in the video said that he has seen another video where a family from Fort Judy assaulted a Grenadian man “on Grenadian soil for running over a dog that was not tied on their premises. The dog ran out into the road and apparently the man’s van passed on the dog while it was trying to chase the van. Now it’s a Caucasian family; they drive behind the man, blocked his path, he couldn’t pass then they began to assault the man, took the keys from his van and burst up the man face.”

He added his opinion that the incident was based on racism. “People does say that racism doesn’t exist in Grenada but that is clearly what it is. Now some of these people, they have money, the people living in those areas –Westerhall, Fort Juedy, L’Anse Aux Epines True Blue they have some level of immunity; … if it was the other way around or if it was two local families that had an altercation, the Police would have already been there to arrest, to charge you know how Police get on already.”

In a threatening manner with cutlass in hand he said “I think its high time Grenadians, let we stand up we know exactly what should we do in situations like this. Now I am not condoning violence, I am not a violent man but matters like that I think some sort of jungle justice is called for. You know why? Very, very rare situations like this would make it pass the newspaper. It’s either they would sweep that under the rug.”

Gordon has been granted bail in the sum of two thousand five hundred ($2500.00) dollars with one surety and is expected to appear at the Grenville Magistrate’s Court on Wednesday September 23, 2020.