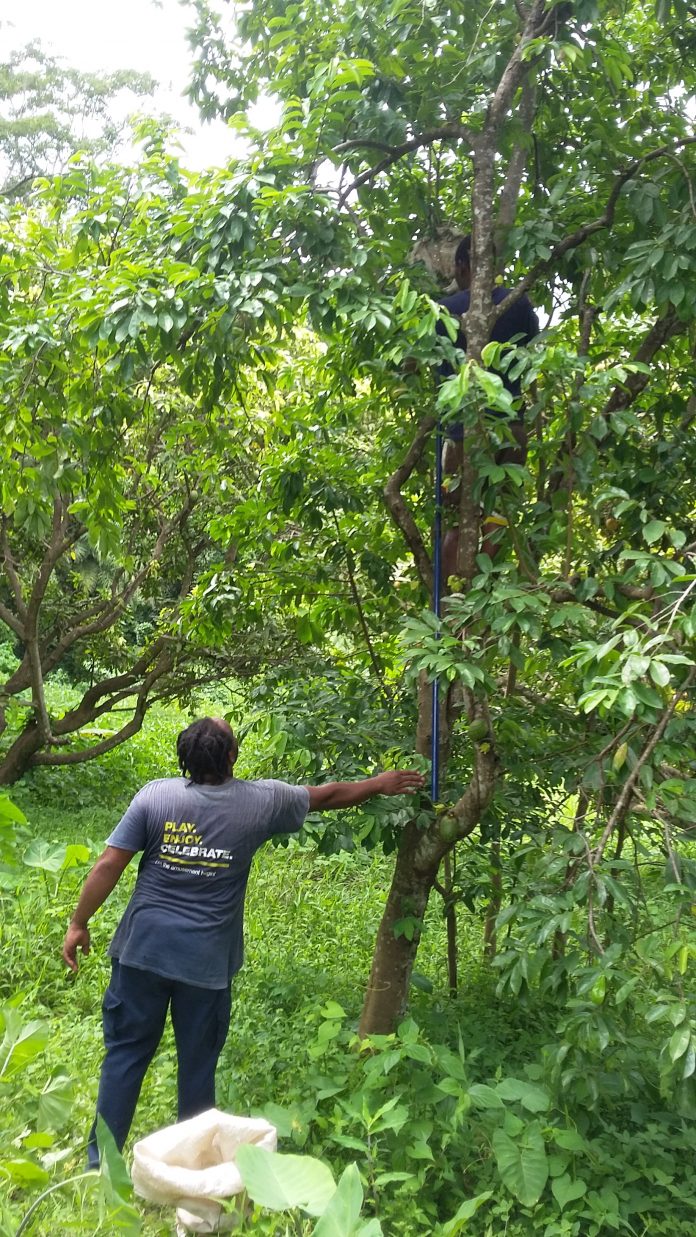 It is unclear to farmers and buyers how a licensing system for Grenada’s ‘green gold’ will accommodate the mix of conditions under which soursop grows.

“I am not sure how it is going to work. There is a lot of uncertainty about it,” said Chantimelle farmer Camillo Alexis. In addition to farming, Alexis has been involved in purchasing soursop from farmers for the past five years. A member of what was formerly known as the Grenada Soursop Association, Alexis delivers soursop to The Grenada Fruit Company, which operates out of the Grenada Co-operative Nutmeg Association pool building in La Digue, Saint Andrew.

“I think it is a good idea they are tying,” said Kamron Joseph, adding, “thieving is a very common thing. It’s everywhere.” Joseph has been buying soursop directly from farmers for approximately two years. He has dozens of clients from Gouyave to Saint David.

Like Alexis and other buyers, Joseph has some clients with just a few trees, while others operate on a commercial scale with hundreds of trees.

“A lot of people have one or two trees. A good tree can produce 100 or 150 pounds; sometimes it is less. It is very uncertain as to how the licensing will work for them,” Alexis told The Grenadian Voice on Monday, adding that the system should not impede the smaller producers.

Generally, peak harvest seasons for soursop are August to September and December to January.

“Soursop is a funny fruit,” Joseph said, noting that there are occasions when the harvest from one tree can vary from 40 to 100 pounds. “You can have a field of 500 trees and get nothing,” he said, what with praedial larceny and the fungal disease anthracnose. He recalled getting a request from a farmer with 100 trees ready to harvest. By the time he arrived at the farm the next day, there was little left as thieves had raided the field overnight.

The amount of fruit buyers like Joseph and Alexis are able to sell to exporters varies. Currently, Grenada is the sole source of fresh soursop for the US. Joseph, who delivers to Big Mac Enterprises, said competition for buying the fruit is increasing and he is limited in how much he can buy, based on what the exporter can purchase from him.

“This morning I got my quota for the weekend for 500 pounds,” he said on Saturday, August 29.

The availability of air transport to Miami and the fluctuating volume of available fruit can impact how much is purchased at the ‘farm gate’ level.

“When the fruit is plentiful the airline will give a quota,” Alexis explained, adding that not having enough volume can also determine whether or not a shipment is loaded for export. Prior to the coronavirus pandemic, there were usually multiple shipping days, depending on production levels. COVID-19 has limited shipping to Sundays.

The Grenada Fruit Company is a subsidiary of the Florida-based Seasons Farm Fresh, which markets tropical and exotic fruits, and describes itself as a “global network of farms with operations in nine countries spanning across three continents.” Chief Executive Officer Nick Bernel told The Grenadian Voice that the company, with its processing plant in La Digue and a delivery station in Victoria, Saint Mark, exports 70 to 80% of Grenada’s soursop. The company, which has about 12 acres of soursop, boasts of being the “number one distributor, grower and investor” in Grenada’s soursop.

Once Grenada’s green gold departs the Maurice Bishop International Airport and arrives in Miami, it is packed or processed according to orders from American consumers. A visit to the SoursopStore.com shows that fresh soursop can be purchased in five, seven and nine pound boxes for approximately $15 to $17 (US) per pound, “which covers the cost of paying the farmers in the Caribbean, shipping by air to Miami after Sunday harvest overnight, running our online business, and then packing it.” In June, the company advised customers the fresh fruit is purchased from small farms in Grenada and that “the weekly soursop harvest is on Sundays in the Caribbean.”

Private sector representative in the Senate Hon. Christopher De Allie warned that Grenada’s position in the American market can quickly be eroded “because other countries in the region (Central and South America) are already applying to the USA for special preference.” Grenada is late in protecting the crop and “we now have to move to do it properly to reorganize this industry.”

“We would appreciate more enforcement,” he added.