Minister of Sports & GFA agree to working together to develop football 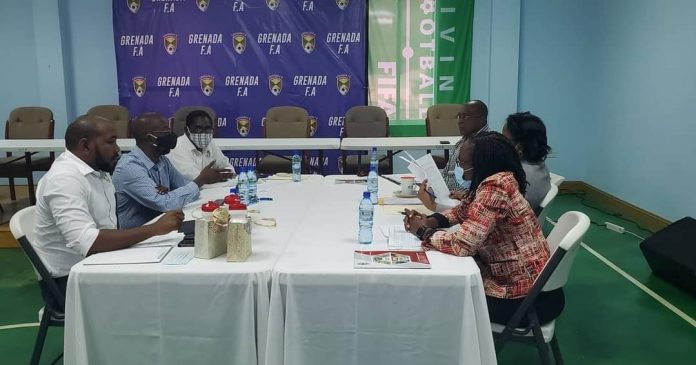 The new Minister of Sports Hon Yolande Bain-Horsford and the Grenada Football Association are committed to work together to further develop football in Grenada.

The decision was taken at the Minister’s first meeting with the Association since her appointment as Minister of Sports.

They spent much time discussing matters relating to the development of the sport as well as the ministry’s plans for the ensuing years.

Minister Bain-Horsford highlighted her desire to see the sport move to a next level and
identified the need for greater cooperation between the Association and the ministry.

The Minister said one of her aspirations is greater engagement, and encouraged the GFA to work closely with the ministry in strategizing plans for the overall growth of football across the Country.

Amongst topics discussed were the plans of the Association to assist government with further improvements of the Fond Playing field, conversion of user License to a thirty-year lease agreement, improvement with infrastructure in other parishes as well as the GFA possibly assisting with community programs along with deeper collaboration for football growth in both the primary and secondary schools.

Minister Bain-Horsford complimented the GFA, noting that it has done significant work to improve the game on the island but she identified its communications with the general public as an area that must improve.

“I am delighted to hear the amount you are doing but when one stands on the side it somehow seems the GFA is not doing anything …You need to do some more to improve on the image of the Association and change these perceptions.”  President of GFA Cheney Joseph highlighted plans for building a technical center, which the Association intends to construct in 2021 as well as introduce a number of programs and competitions.
According to Joseph, “If only we (GFA & Ministry of Sports) can establish a memorandum of understanding between ourselves I think both bodies can save money while increasing the impact on those investments,” said Joseph.
The government recently signed an agreement with the GFA to allow coaches in the
ministry to be trained by the GFA.  Also, they have for the first time agreed to the establishment
of an elite program, which will see over 30 footballers participating in weekly training.