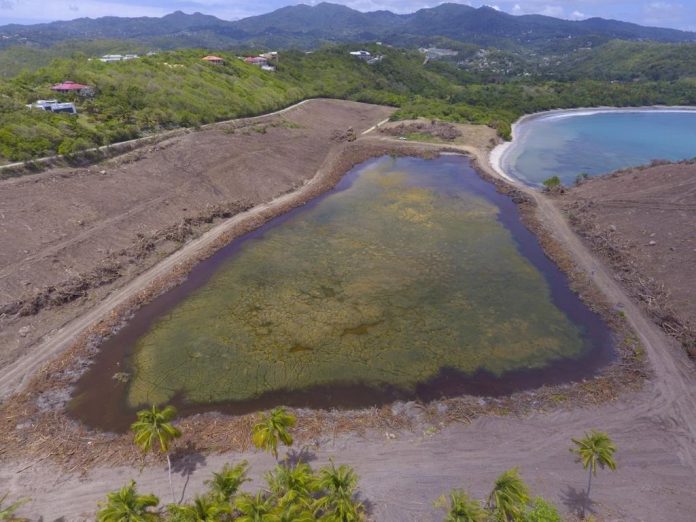 Shortcomings with ecological repercussions are identified in the Landscape Design, Architectural Plans and Environmental Impact Assessment (EIA) for the Range Developments project at La Sagesse.

“A lot of the terms of reference were not covered and the EIA was not thorough,” Dr Jody Daniel-Simon, executive director of Gaea Conservation Network, told The Grenadian Voice.

In March 2020 Gaea was granted permission by Range Developments to review the plans and EIA for the $100-million (US) Six Senses hotel project. The network of conservationists and other scientific experts found the plans and EIA failed to fulfill the terms of reference from the Land Development Control Authority (LDCA). Gaea points to a lack of data and inadequate research.

The LDCA requested information on the impacts on “coral reefs and the marine substrate; fish and shellfish population and other marine life.” Gaea reports that “little information” is included regarding the baseline condition of the nearshore marine areas and potential impacts.

“Existing, publicly-available GIS maps show coral reef fringing the entirety of the headland and also in close vicinity to the southward facing beach. Likewise, seagrass beds are also extensive in La Sagesse Bay. Consequently, the EIA does not appear to satisfy the terms of reference provided from the Land Development Control Authority.”

To remedy this, Gaea recommends a separate baseline assessment of the nearshore marine environment encompassing both bays and the headland, from which guidelines and recommendations are developed to reduce the impact of the project.

The conservation network pointed to EIA recommendations ignored by Range Developments, including more in-depth public consultations. “Alternatively, the EIA, or a concise version of the EIA, should be circulated to the public and a period provided in which public comments can be submitted and responded to in a transparent manner.”

In keeping with Grenada’s Integrated Coastal Zone Management Act, the developer should maintain a line of existing vegetation along all land abutting the coast.

“The EIA also mentions that only certain trees will be removed from the site and that a layer of vegetation will be left on the border of the development to provide a buffering effect. This was not done, as can be evidenced by the current condition of the site,” according to Gaea.

Since Range Developments began preparations for the first major hotel in the Parish of Saint David, local residents and others have expressed public concerns about the subsequent destruction of mangroves and wildlife habitat and the impact on the La Sagesse Salt Pond.

Gaea notes that Ebird records dating to 2003 documented 76 species in the pond. “A major group of these birds are wetland-dependent, which are not supported in such a large proportion in any other wetland area of Grenada. These data were not included in the EIA.”

Moreover, the project appears to be too close to the La Sagesse River. A baseline assessment of the riparian ecosystem is needed, leaving an appropriate buffer zone of vegetation to preserve the riverbanks and prevent erosion, Gaea advises.

The review states no data were provided in the EIA on the water chemistry of the pond; while acknowledging inputs such as precipitation, run-off, groundwater and seawater, it is not clear what the relative contribution of each source is to pond.

“We anticipate that this pond discharges [receives] groundwater. NAWASA has a groundwater well nearby [which is largely used in the dry season]; as such, if this pond shifts from discharging to recharging for groundwater, the planned modifications to pond water chemistry could impact the water supply for the surrounding communities,” the Gaea cautions.

Further data is required on the Leatherback and Hawksbill turtles that nest on the beaches of the pond, as well as green sea turtles that forage in seagrass beds, including the impacts of effluent run-off. “All three species are listed as endangered or critically endangered globally,” Gaea warns.

In making the review public, with permission from Range Developments, Daniel-Simon writes on social media about Grenada’s commitment “to protect at least 20% of our marine and terrestrial resources by 2020, something we are consistently failing at. Added to that, Grenada boasts about being centered on sustainability and adopting a blue growth strategy,” she writes.

“Sadly, our version of a blue growth economy is quite divergent from what a true blue economy should be. I can no longer sit silently – working to lead research locally, presenting our findings/knowledge to the relevant authorities/individuals, and we still are doing business as usual.”

The response to her call has been encouraging.

“I am hopeful that it improves the project – ensuring that the project adequately addresses community concerns and utilizes best-practice mitigation strategies to deal with the numerous environmental impacts many of us have identified,” she told The Grenadian Voice on Tuesday.

Other recommendations to Range Developments in the 10-page Gaea document include the following: