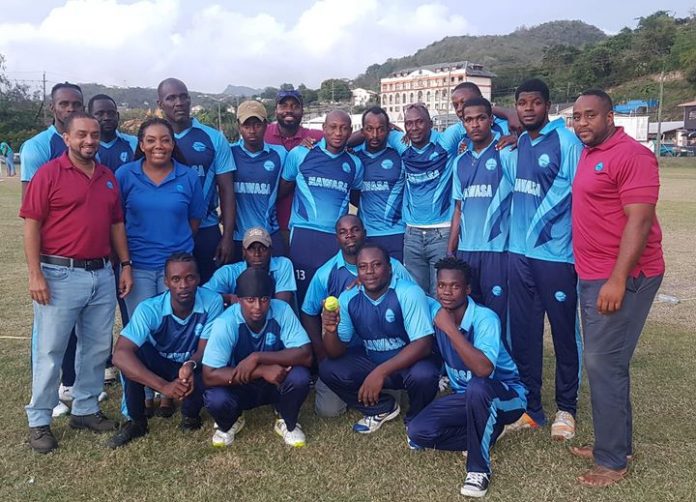 NAWASA are the 2021 Grenada Chamber of Industry and Commerce Windball Cricket Champions. In the final, they defeated the Royal Grenada Police Force by six wickets.

Nickozi St Hillaire top-scored on 33 and Rolston John 15 and Frederick Coutain 10. Bowling for NAWASA Shabba Noel had the best figures of two wickets for nine runs.

Chasing 104 for victory in 15 overs, NAWASA reached the target thanks to solid innings played by Shabba Noel 44 and Ryan John 33.

For his brilliant all-round performance in the final, taking three wickets and scoring 44 runs Shabba Noel was adjudged Man-of-the-Match.

The presentation ceremony, which followed the championship game, recognized outstanding performances in the month-long competition. Teams scoring 200 runs in their 15 overs were Clarkes Court Strikers in their match against Independence Agencies, 212 off 15 overs; NAWASA Water Warriors 242 against Brydon and Minors.

The batsman with the highest individual score was police officer Rolstan John 104 scored against Mt Cinnamon. He was the only player to century in the competition.

The bowler taking the most wickets in an innings was Alwyn Bowen of NAWASA who took four wickets for two-runs against Brydon and Minors.