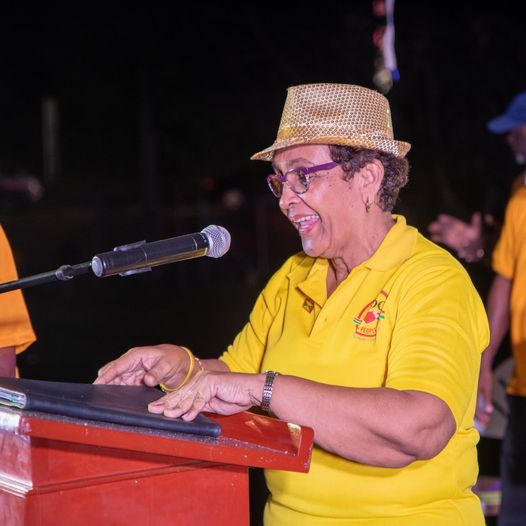 Franka Alexis-Bernardine has tendered her resignation as leader of the National Democratic Congress (NDC) on Thursday November 26.

The mother of five whose second husband passed away in August 2018 at the age of 76, cited health issues as the reason for her resignation.

“My doctor has indicated that the stress levels are too high and I run the risk of shortening my life… The stress is having a negative impact on my health and has created a number of factors that will disappear if the stress factor is reduced,” she said.

Bernardine also will no longer be the caretaker of the constituency of St George South East. She became leader of the 33-year-old party in November 2019 when the post became vacant following the resignation of Nazim Burke. While not winning any seats in the last general election, the NDC received roughly 40% of the votes which made it the party that placed second in the race but not the official opposition party.

According to Claudette Joseph the Public Relation’s Officer (PRO) of the NDC, in accordance with the party’s convention, the Deputy Leader Adrian Thomas is now the acting political leader of the party.

The news of Bernardine’s resignation was made public on social media and this was questioned by some media workers.

However, the PRO said “that was sister Franka’s announcement to all of us.”

Through the years Bernardine was the Executive Director of the New Life Organisaton (NEWLO). She then moved on to working with the Coalition on the Rights of the Child/GRENSAVE to establish the UNDP funded programme for adolescent mothers (PAM); after which she rose to the position of Associate Peace Corps Director of the Eastern Caribbean. As Minister of Education from 2008 – 2013 among the many things she will be remembered for is a fresh start to the school books programme.

She praised her Vincentian mother who recently turned centurion for her strong support.