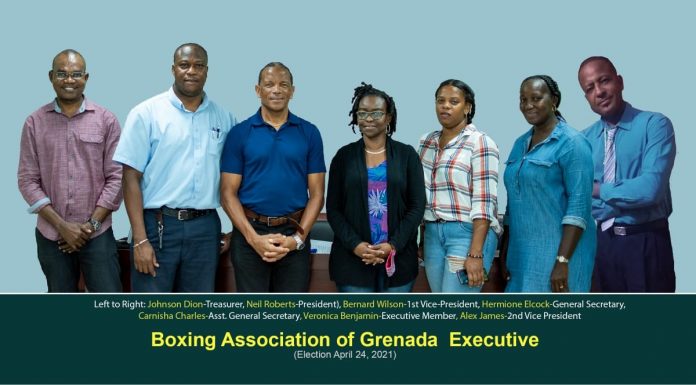 The Association elected a seven member team, comprising of four men and three women, to manage its affairs for the next four years. The elected executive members are as follows:

The election was conducted under the AIBA new membership policy that was adopted by the     Board on January 22, 2021 in Lausanne, Switzerland and was observed by a representative of AIBA (International Boxing Association, Switzerland), Yury Zaytsey, via a high resolution live Zoom link that was uninterrupted  throughout the General Meeting proceedings and actual election process.

Ralph Lord was the electoral Officer. He is a former GBSS teacher, and the President of the Gr                 Volley Ball Association, who was ably assisted by Richard Peters.

The new executive is expected to manage boxing affairs within the reform and transparent agenda of its parent body, AIBA, and deploy exceptional leadership and management skills in providing and organising training opportunities for coaches, referees and officials and working with the various coaches to train local boxers and prepare them for local, regional and international tournaments within the ambit of the various COVID-19 protocols.

Being mindful of the COVID-19 pandemic the new executive will be working along with the Ministry of Sports and other relevant Government authorities in ensuring a safe return of local boxing competitions.

Former President of the Boxing Association of Grenada, Johnson St. Louis, passed away on March 01, 2021, and was interred on March 18, 2021.