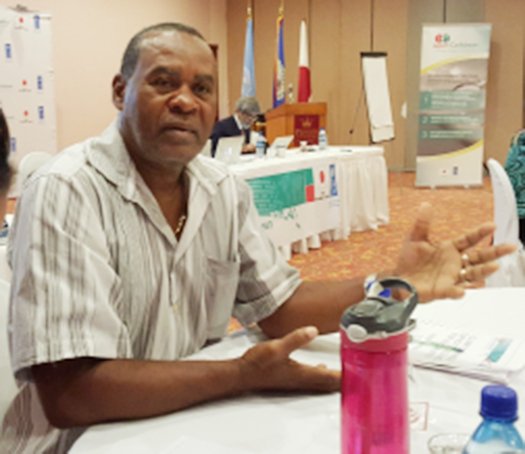 Burke alludes to front-page article as scribbles of an imbecile

Nazim Burke, former Finance Minister and Political Leader of the National Democratic Congress (NDC), is questioning the timeliness and relevance of a recently released newspaper article, which states that he is under criminal investigation.

Burke, an attorney at law, told the media (on Tuesday August 25, 2020) that he cites the story as a bid to destroy his character and destroy him financially since he was not interviewed by the journalist on the issue.

He explained that the issue relates to his son going off to study in Canada in 2007 during the NNP administration. His son was awarded a scholarship as ‘Island schol’ and finished his degree in 2012.

The newspaper quotes an ‘authoritative’ source who said that Prime Minister Mitchell decided to go after Burke on the grounds that he was engaged in wrongdoing while he was Minister of Finance with state funds for the purpose of paying for his son’s education at the University of Toronto in Canada.

“The source pointed out that Prime Minister Mitchell and the Financial Intelligence Unit could not pursue Burke any further since they had not been able to come up with a single piece of evidence of wrongdoing on his part,” noted the newspaper.

The attorney said that the headline is misleading since the article itself appeared to clear him of any blame or suspicion. “The headline implied that there is an active ongoing criminal investigation into some element of my conduct….The headline is not justified by the words of the article,” he said.

He is questioning the reason for the prominence the seemingly baseless article got by being placed on the front page of the weekly newspaper as a lead story of the week.

George Worme, who is closely associated to the newspaper, told The Grenadian Voice that the article is very important “and in the national interest as it shows the abuse of power by the Prime Minister of the country to use the FIU and Supt Tafawa Pierre to go after his political opponents.”

The article also contained information on Burke’s association with the 1979-83 Grenada Revolution, “Burke was a senior member of the staff in the Ministry of Finance and Planning that was headed by former Deputy Prime Minister, Bernard Coard.”

Referring to the article as cowardly, deceitful and disgusting, Burke said that it is likely to cause irreparable harm to his reputation and his financial livelihood “and the writer must be held accountable for whatever damage is done.”

He said the headline is already causing serious consternation among those who know him and asks “is this a genuine mistake, are the words scribbles of an imbecile or professional recklessness on the part of the writer? Is the writer acting as an agent for others in using this headline in exchange for money or other favours?”

However, Worme said “As far as we are concerned the article depicts Nazim Burke as the victim of a spiteful act by Prime Minister Keith Mitchell.”

A Political Analyst told The Grenadian Voice that it is quite clear that there is no relationship between the article and the headline, so the issue has to be studied a little more to understand its relevance.

During the week, political activist Clifford Bridgeman made the rounds on call in radio programmes expressing sorrow over the article.