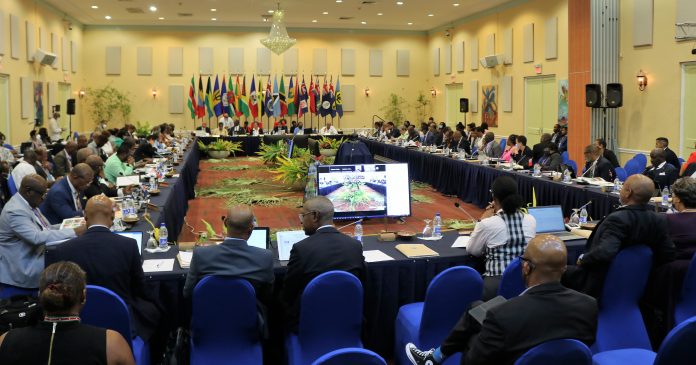 Calling the just concluded meeting of Caribbean Community (CARICOM) Heads of Government “very fruitful,” incoming Chair Chandrikapersad Santokhi, President of the Republic of Suriname, warned “this is not a time to do business as usual.”

Speaking to reporters in Suriname at the conclusion of the 43rd Regular Meeting of the Conference of Heads of Government on Tuesday, President Santokhi said Caribbean leaders “have to pave the way for future generation. We have to lay firm foundations in order to build back better.”

Among the issues addressed at the press briefing, were the free movement of more categories of workers among CARICOM member states and the availability of sea transport. He stated that, in keeping with a commitment at the opening of the meeting, Heads agreed to make a decision on a topic that has been discussed for many years.

“We took action for all those citizens who are looking for opportunities in sister nations,” he said, explaining that barriers are being removed for domestic and agricultural workers. He stated, however, that if there is going to be free movement of agriculture and agri-business products, more barriers will need to be removed. While CARICOM will conduct a comprehensive study on transportation connectivity, Heads must “take quick steps to enable us to move forward to bring our products to our sister nations.”

On the issues of connectivity in regional sea transportation, Prime Minister Ralph Gonsalves of Saint Vincent and the Grenadines reported that there are currently two proposals before Heads; one from Trinidad and Tobago and one from “Barbados, Guyana and other countries.”

“A mechanism has been put in place to work out these arrangements and to see how we can advance either of these initiatives or blend them together as the case may be. It’s a matter of urgency. We’re at the early stage in this process, but they both look promising.”

Incoming Chair Santokhi, whose term begins in January 2023, also confirmed that CARICOM Heads agreed to establish three committees, as a follow-up to earlier meetings with US President Joe Biden and Vice President Kamala Harris. The committees, which will be led by CARICOM heads and comprise Caribbean experts, will focus on food security, energy and climate crisis financing

“There are meetings planned for the coming days,” he added.

“We have re-set our relations and refocused our Caribbean – US partnership on the critical challenges of climate action, security, energy transition, and access to finance. Last month at the Summit of the Americas, the U.S announced its Partnership to Address Climate Change (PACC 2030) which aligns with many of our priorities and opens a new chapter in US CARICOM relations.”

Facebook
WhatsApp
Previous articleSandals National Learn to Swim Week for the entire family
Next articleFinancing the Payment of Pension and Gratuity: Part 1