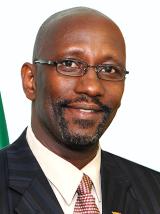 Re Your Resignation: Did You Speak to Keith Mitchell?

Greetings Hon Member of Parliament!  Permit me to clarify that I write in my personal and individual capacity.  Now that it is official that you have tendered your resignation from Cabinet, I feel compelled to write to you.

Ever since rumours of your resignation began circulating, just prior to the debate of the no confidence motion in Parliament, I have been HAUNTED by a brief conversation that I had with you in December 2011, following your return from the Climate Change Convention of Parties held in South Africa.     I had visited your office to express my concern on a matter which pertained to a certain advisor – conflict of interests – which I think also had implications for the Ministry of Foreign Affairs.  You indicated that you too had expressed concern and asked questions but had not received any satisfactory answers.  I expressed my disillusionment and disappointment with the trajectory of the National Democratic Congress.  Where was the promised change?  Why was the government of the Congress Party pursuing the failed strategies of the New National Party?  Why was it again proposing citizenship by investment – essentially the selling of passports – with advice from Henley and Partners?

You also indicated that you felt targeted by the Prime Minister and you were demoralized.   You shared some of the frustrations that you felt as a result of the various cabinet reshuffles which had transferred you to various ministries just as it seemed that were making progress.  These were repeated on the May 20 edition of Sundays with George Grant, programme.  It was clear that you were aggrieved and having heard your side, I empathized.  You expressed disappointment that you had not been able to serve in the capacity that you had hoped.   As I was about to leave, I asked what was the way forward?  And it is THAT answer which keeps ringing in my ears that has compelled me to write this letter – “I should talk to Keith Mitchell”!!  I left your office in quiet disbelief thinking that had to be a bad joke and that it was only your frustration speaking.   After all, you and the Leader of the Opposition were from the same close-knit community.    How could it even cross the mind of ANYONE who had offered themselves up for office, TO SERVE THE PEOPLE, to help Grenada recover from the ravages of 13 years of NNP tenure ever consider that “talking to Keith Mitchell” was the answer to the challenges and frustrations they were confronting – no matter the differences with or frustrations felt in relationship to Prime Minister Thomas?  Where was principle?  Where were core values?

As a member of the constituency represented by you and as one who voted for you in 2008, I ask you the question – DID YOU TALK TO KEITH MITCHELL?  If you did, was your resignation in any way influenced by any talk you may have had with the Hon. Leader of the Opposition?

Could you also advise Hon. Hood whether there was a proposal, at any time, from your Ministry of Foreign Affairs to make Peter De Savary an investment ambassador?  If there was, could you explain what was the basis for that proposal?

In your appearance on May 20th edition of SWGG, you appeared to be critical of the Prime Minister’s attitude to your resignation.  You indicated that the Prime Minister did not invite any conversation with you when you approached him about resigning – he said to you if you want to resign, then resign!!  What else would you expect Hon.  Hood?  The entire nation was already abuzz about your unprecedented public criticism of the 2012 Budget and you abstained from voting in the crucial No Confidence motion against the Prime Minister.  Were I in the Prime Minister’s position, I would have been VERY pleased to accept your resignation, saving myself the disagreeable task of having to fire you.

I empathized with your frustrations.  But, Hon Hood, when the odds are stacked against you, the best revenge to exact from your “enemies and detractors” is to succeed.  And if you were not allowed to succeed as a minister, what was there to stop you in succeeding as the people’s representative?  You noted that your constituency was disproportionately underfunded in respect of projects.  If money was not available, then THERE HAD TO BE ANOTHER STRATEGY – what about mobilizing, organizing, bringing hope, encouraging, conscientizing, enabling and empowering.   While money is a factor, Hon. Hood, it is not the most important or necessary factor.  YOU, of all persons, should understand that Hon. Hood.  Were there no inspiring stories from all of that biblical training to draw on?  What were the “loaves and fishes” in your constituency Hon.  Hood?  Didn’t your constituents bring any talents, ideas, skills, commitment to the table?  What were the other assets of your community – the community centres, playing fields, community organizations, networks and “links”- and how could these be harnessed to work for the community? As one caller to SWGG suggested it was about doing what you could with what you had.

In response to criticisms that you were “not on the ground”, you indicated that you had intended to be a different kind of politician and people should not expect you to be in the “rum shop”.  That Hon Hood, is a very telling statement.  I would point out that it was not about being in the rum shop, it was about what you do when you are in the rum shop.  The first rule of development practice is to “begin where the people are”!  So if that is where the people you represent are, then that is where you have to “ground” with them.  I am quite sure that they would not expect Pastor to drink rum with them but you could make a rum shop encounter an occasion of conversation, enlightenment, education and one that they could even begin to look forward to.

Hon Hood, permit me to express my DISAPPOINTMENT.  I had hoped that when you offered yourself to hold political office, your experience as a pastor would have been brought to bear.  I expected, Sir that, somehow, you would take things to a higher and nobler plane but it appears that in the political melee you have only ADDED to the pain, disillusionment and sense of betrayal being experienced by the Grenadian people.

Nonetheless, it must be remembered that public service requires great sacrifice and is a thankless task.  While this is a period of disillusionment and hurt, it must be remembered that you would have made sacrifices in the process of offering yourself for public office.   History is yet to be written and it will no doubt judge your performance.  I would therefore like to express my appreciation of the “good times” and positive contributions that you would have made and hopefully will still make.

I conclude with a comment on the pastors in politics re the poll that was conducted by grenadabroadcast.com.   While I champion the right of everyone to be involved in the political process, I honestly do believe that pastors in FRONT LINE PARTISAN politics in Grenada is an UNWELCOME trend.  Pastors in front line partisan politics in Grenada HAVE LOST THEIR WAY.  By their open partisanship, they have lost their credibility and the moral high ground and they are only adding to the hurt and divisiveness of the Grenadian people.

I thank you, Sir, for the opportunity to offer these observations and comments.