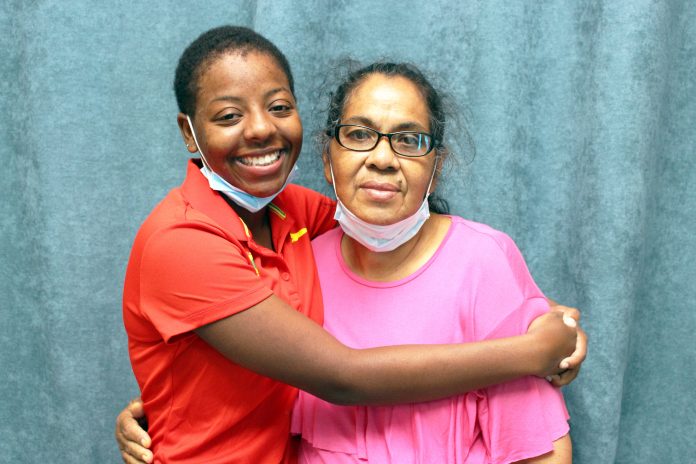 Grenada makes its international debut in Para-Swimming in Lewisville, Texas April 15-to-17 with the participation of former Anglican High School student, Nye Cruickshank in the World Para Swimming World Series at the LISD Westside Aquatic Center

The 20-year-old, who had a section of her left leg amputated as a child, has been a competitive swimmer in the local events staged by the Grenada Swimming Association for more than a decade.

On Thursday (April 8) the Grenada Paralympics Committee, the Grenada Amateur Swimming Association and the Grenada Olympic Committee held a media ceremony at Olympic House to recognize and announced her participation in the International Swim Meet in Texas.

Speaking to the press, Cruickshank said she is delighted to fulfil one of her childhood dreams, competing in an international swimming meet. She said at age seven she lost her left leg as a result of cancer and swimming became a passion.

Strongly supported by her family, and in particular her grandparents, the para-swimmer said they took her to the swimming pool to attend classes regularly and she aimed to be the best she can.

With a huge smile, the 20-year-old described her grandparents as buddies” and “they are my best friends”. She also thanked her coaches, Natale Regis and Ronald Charles and the Swimming Association for their unwavering support.

Coach Regis said Nye is ready for the challenge despite the COVID 19 Pandemic restrictions and protocols that limited her preparations. According to Regis when the Good Hope pool was closed because of the restrictions, Nye trained and utilized the sea to swim and improve herself.

In Lewisville, She will first participate in the Classification events, April 12-to-14, which will determine the category of events she is eligible to compete in. In para-sports, participants compete alongside athletes with similar disabilities.

Following the classification, Cruickshank will compete in the freestyle, butterfly and possible 400 meters events.

The championship brings together leading swimmers in the USA and other countries who are endeavouring to classify and meet the standards for qualification in the Summer Paralympic Games in Tokyo Japan in August and September.

Permanent secretary in the Ministry of Sports Mike Stephen, who represented the Minister of Sports Honorable Yolande Bain-Hosford, commended the achievement of Nye Cruickshank for becoming the first para-swimmer to represent Grenada at an international event and wished her a world of success.

President of the Grenada Olympic Committee (GOC) Roystan La Hee also applauded the swimmer, noting her tremendous spirit and dedication to the sports.

President of the Grenada Amateur Swimming Association Peron Johnson said Nye’s accomplishment is a history-making achievement, reflecting on her seven years of hard work and commitment, Ms. Johnson commended her grandparents and the entire swimming community who supported her over the years.

President of the Grenada Paralympics Committee Ray Roberts described Nye Cruickshank as yet another outstanding athlete and symbol for persons with disabilities and urged parents who have children with a disability to recognize their individual talents and invest time and energy to help them achieve their dream.

Although Grenada has participated in the Summer Olympics, beginning in1984 Games in Los Angeles, it is yet to debut in the Paralympics which follow the Summer Games.

Ishana Charles has qualified in the Javelin, having competed and achieved the standard at the 2019 Para-Athletics World Championship.

Lewisville 2021 WPS World Series will be staged on strict COVID‐19 protocols, requiring swimmers and officials to have PCR test before and after the games.