Persuader looking to lead the NDC 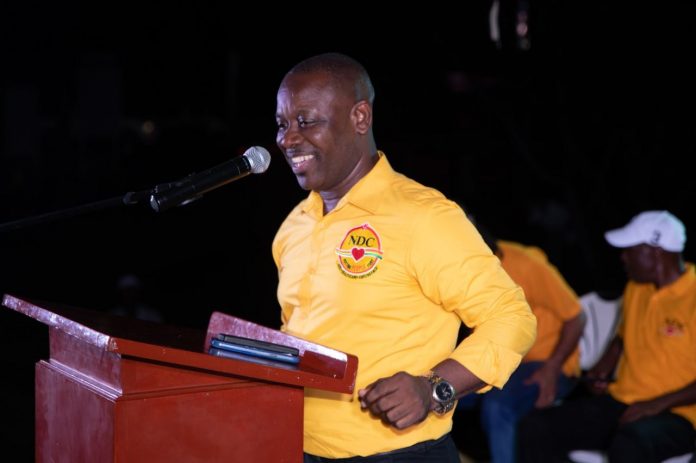 From the time Adrian “Persuader” Thomas joined the National Democratic Congress (NDC) in 2000 he says he has had aspirations to lead the party. At the time, he was employed in the Ministry of Agriculture pest management unit and was instrumental in delivering the Pink Mealybug Control Programme.

“I joined the party because I stood for the same values,” he told The Grenadian Voice during an interview on Monday, November 30. When asked what those values are, he cited patriotism, national pride, transparency and accountability and “national development for all, not just a few people.”

The day after Franka Alexis Bernadine announced that she was retiring from active politics and the leadership of the NDC on November 26, the party convened a press conference at which Thomas indicated he intended to reach out to all stakeholders, non-governmental organisations and youth groups before the end of 2020.  He said that process had already begun before Bernadine made her announcement via social media, citing health reasons. Her stepping down, after leading the party for a year, meant that Thomas transitioned from his position as deputy political leader to acting leader, in keeping with the party’s constitution.

He says his priorities are to continue building the party’s “infrastructure,” complete the process of getting constituency groups in place and identifying caretakers for all 15 constituencies. Thomas was the NDC candidate for the Constituency of Saint David in the 2013 and 2018 general elections, losing to the New National Party’s Oliver Joseph on both occasions.

Now, looking ahead to the general council meeting that is expected to take place during the first quarter of 2021, at which potential leadership candidates will be identified, he says the party is focussed on preparing for a general election. While the next general election is not constitutionally due until 2023, it could be called at any time. As for who will lead the NDC into the next general election, that is expected to be determined by delegates to the 2021 convention, the date of which will be decided when the general council meets.

Meanwhile, Thomas is focussing on the party’s outreach and building its base, admitting that this has “lagged behind” because of the coronavirus pandemic. He’s been making phone calls, sending letters and endeavouring to be in touch with every stakeholder “because I know for a fact that it takes the effort of every stakeholder in making a contribution to develop Grenada.”

“If we are putting ourselves forward to govern this country, we have to continue the process that started under sister Franka,” he said, adding that priority areas include diversifying agriculture and agro-processing, improving health care, addressing youth unemployment and the far-reaching implications of contract labour.

The fact that the NDC has had three leaders since 2008 is not an indication of a crisis within the party, he said, admitting that one of the biggest challenges is to tackle the public perception that the changes in leadership are a sign of trouble within party ranks. Those sentiments were also expressed to this newspaper by assistant public relations officer Ron Redhead.

“I don’t see it as a crisis. Sister Franka has her own stress level. It has nothing to do with the party. She is still involved,” he said, adding that her withdrawal means he “will be playing a very integral role in the Saint George South East constituency” where she served as the NDC caretaker.

“I will help organise there. It is all part of the process in preparing for elections,” according to Redhead, who previously served as an Opposition Senator in the Upper House.

Redhead, who was the first youth to be appointed to the NDC management committee, said strengthening the youth arm is essential and noted that former political leaders (Tillman Thomas, Nazim Burke and Franka Bernadine) all have a role in the party.

“I can’t agree with the perception that we have a leadership crisis,” he said, noting that as the party works to expand its base “we open up the avenues to begin the search process for a new leader.”