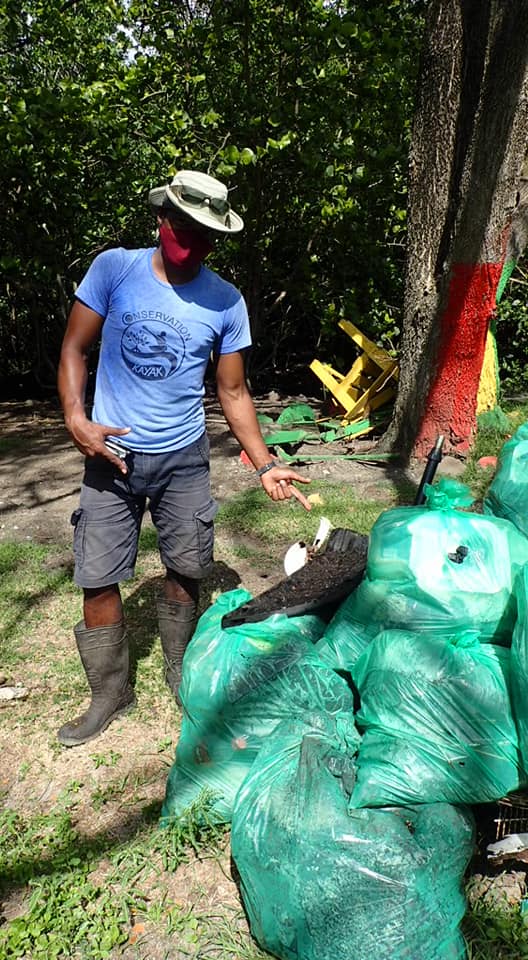 Plastic bags, bottles and wrappers continue to plague pure Grenada, as uncovered by mangrove and beach clean-up efforts over the years.

A clean-up on Saturday (November 07) of the mangroves in the Woburn Marine Protected Area (MPA) produced 275 pounds of trash. Eight volunteers joined Kendon James, Grenada’s International Coastal Clean-up project coordinator working on behalf of the Caribbean Youth Environment Network and Conservation Kayak, at the MPA Observatory Tower. The group collected trash along 300 metres on the edges of the mangroves.

“There were some pieces, likes stoves, that we were unable to move,” James told The Grenadian Voice on Monday.

Two years ago, on December 09, 2018, a clean-up of the Woburn mangroves by the Grenada Fund for Conservation (GFC) collected eight large bags of trash. Again, plastic dominated.

When the GFC conducted a similar clean-up at Pearls, Saint Andrew in September 2020, volunteers collected a dozen bags of garbage; “primarily plastic waste such as soda bottles and grocery bags, as well as clothing and other household items,” GFC project administrator Zoya Buckmire told The Grenadian Voice on Tuesday.

This clean-up followed a GFC and Sandals Foundation initiative in 2019 to clean the eastern coastline from Telescope to La Poterie.

“Despite collecting 45 bags of plastic garbage in December (2019), just two months later we collected an additional 85 bags from Telescope alone. In total, we picked up a staggering 2,300 pounds of garbage  – 90% of which was plastic – from a coastal stretch of mangroves only 1.3 kilometres long,” the GFC reports.

In decades past, it was not uncommon for a beach clean-up to include the removal of mangroves, as people were generally unaware of the value of these ecosystems on the boundary between land and sea.  For example, the mangroves along the eastern coastline of Grenville Bay were gradually destroyed by such clean-ups, sand mining and cleared to make charcoal, as well as being impacted by natural forces such as waves and heavy winds. In the past, the destruction of mangroves for development purposes was not rigorously opposed by the public as happens today; as in the case with hotel developments at Levera, Saint Patrick and La Sagesse, Saint David.

It was not until November 2015 that the United Nations Educational, Scientific and Cultural Organisation (UNESCO) proclaimed July 26 as the International Day for the Conservation of the Mangrove Ecosystem.

The UNESCO proclamation defines  mangroves as a “unique, special and vulnerable ecosystem, providing by virtue of   their   existence,   biomass   and   productivity   substantial   benefits   to   human   beings,   providing  forestry,  fishery  goods  and  services  as  well  as  contributing  to  the  protection  of  the coastline and being particularly relevant in terms of mitigation of the effects of climate change and food security for local communities.”

In 2017 the International Union for Conservation of Nature reported that half of the 79 million acres of mangroves around the world had been cleared or destroyed. Four years earlier, the GFC, together with the Grenada Red Cross and local residents, embarked on the At Water’s Edge project to restore mangroves through an initiative funded by The Nature Conservancy. More than 300 mangroves were installed in PVC pipes for support with plants continuously replaced by community residents in Telescope, Saint Andrew.

“A large part of what we do is for the environment and the people. We work along with the community to make sure they understand the importance of mangroves and buy-in to what we are doing,” Buckmire noted.

While that project ended in 2018, Buckmire said “its success is validated” by the fact that “mangroves planted in 2017 are doing very well and are now more than 10 feet tall.”

Mangrove restoration efforts by GFC, with support from The Sandals Foundation, have expanded further north in Saint Andrew. The non-governmental organisation is working along the east coast at Pearls; specifically along the beach parallel to the air strip where coastal erosion and accumulating trash have negatively impacted the mangroves and the beach.