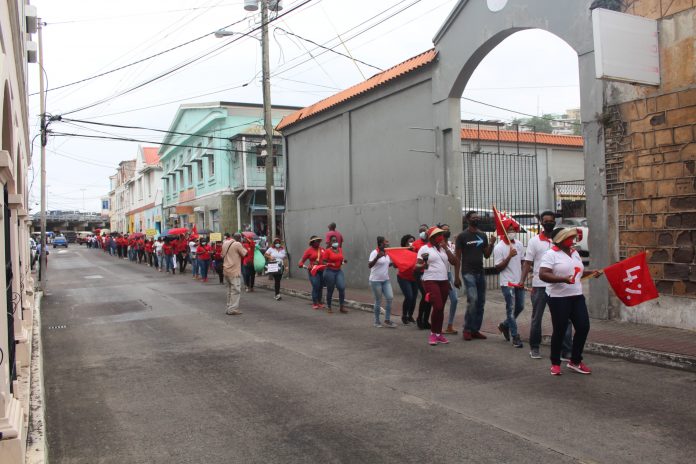 Despite the Prime Minister’s plea to wait until the country’s fiscal situation improves, unions representing public officers remain adamant that their 4% salary increase should be paid forthwith.

This was evident on Wednesday when scores of teachers and other public officers, again, marched through the streets of Saint George’s demanding the payment for 2021.

In last Wednesday’s national address, Dr the Right Hon Keith Mitchell took time to explain the fiscal situation to public officers and why the payment cannot be made now, adding that there are other workers impacted by the COVID-19 pandemic and are looking to the Government for financial aid.

Dr Mitchell assured public officers that “there is no question of if Government will pay the 4% increase. Our track record in this regard, speaks for itself…you are entitled to your increase and you will be paid your increase, but let’s be realistic, thousands of your sisters and brothers forced into unemployment by the [COVID-19] pandemic and left without an income, are also looking to Government for much-needed help to survive this crisis.”

Explaining the reason Government did not implement the increase due from January, Dr Mitchell said, the “significant shortfall in revenue caused by the COVID-19 pandemic, has necessitated tighter controls on Government’s expenditure on recurrent budget items such as wages and salaries.”

Nonetheless, new President of the Grenada Union of Teachers (GUT), Jude Bartholomew, told this newspaper that his union, along with others, “stand resolute on this 4% matter,” adding that their stance is one that is just and fair.

He added that “The Prime Minister’s desperate attempt…is doing what he can do best trying to spin a just industrial action with cheap psychology and emotions to sway the public on his side when he realizes that all the political stooges that were used for the few weeks to trick the public to take government side did not work.”

Bartholomew went on to say that the Grenadian people are wise and called on Government to resolve the matter by paying the increase.

Notwithstanding the Prime Minister stating a shortfall in revenue of $96.6 million in 2020 and that in January and February this year, Government collected $30.1 million less than it did in the same period in 2020, the GUT President said “it is safe to say that the Government’s information cannot be trusted, Government is not always truthful and spins figures.”

Scoffing at Government’s claims of being fiscally responsible, Bartholomew said “Government can spend its money wherever it wants and it chooses to spend the money wherever it wants.” He accused government of not wanting to live up to its commitment to workers but found monies to repurchase Grenlec and will find monies to replace street lights and give a monthly subvention to the Maurice Bishop International Airport (MBIA).

President of the Public Workers Union (PWU), Brian Grimes, said the Prime Minister’s utterances during his address seem contradictory to Government’s actions, pointing to repurchasing shares in GRENLEC, its promise to give a monthly EC$1 million to the MBIA and hiring highly paid advisor – former Member

The Prime Minister had admitted that it is true that Government incurred significant additional expenses in recent months, some brought about by the fallout from the pandemic. He explained that the repurchasing of GRENLEC shares was necessitated by an arbitration ruling that required action within a stipulated time and failure do so could have resulted in a hold on all Government’s money; thus, disrupting Government services and spending such as the monthly payment of salaries to public officers.

With public officers voicing that government can find the monies from other sources to pay them, Prime Minister Mitchell further explained the distinct difference between recurrent and capital expenditure. Recurrent or continuing expenditure includes wages and utility bills which are paid from revenue generated within the current fiscal year while the capital side of the budget provides for expenditure on development projects, asset acquisition or other such initiative that represents an investment and fosters development.

More so, the he stated that the responsible fiscal management policies adopted and maintained by this Government, prevents it from using money allocated in the annual budget for capital expenditure, on recurrent expenses. Failure to abide by this will jeopardise millions of dollars in additional funding that Grenada can receive from donor agencies and development partners, the PM said.

Public officers’ previous march through St George’s was on Tuesday March 23. Dr Mitchell expressed that “it pains me to see that some of our teachers and the leadership of the Grenada Union of Teachers, feel the need to engage in protest action in the middle of a global health crisis and during a State of Emergency, and breaking the laws of the land while doing so.”