Questioning the legality of Traffic Wardens 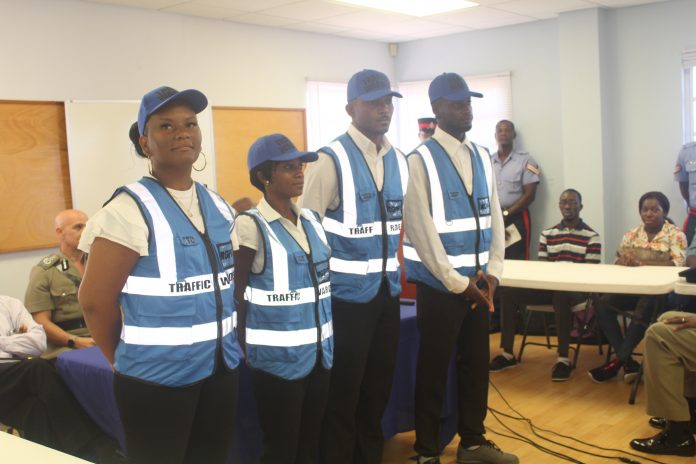 While the debate continues regarding the legality of Traffic Wardens to exercise duties alongside police officers such as issuing tickets, an official of the Royal Grenada Police Force (RGPF) said until a court rules otherwise, wardens will continue to operate.

The Head of the Community Relations Department (CRD), who, at the time, was clarifying misinformation about Traffic Wardens in a recent local e-paper, said: “As far as the RGPF is concerned, the Traffic Wardens were properly instituted and employed. Unless and until a court or competent authority says otherwise, we continue to value the contribution of wardens to the management of traffic on our roads.”

The local e-paper reported that Wardens were illegally employed and their cases are being thrown out at the court. However, Superintendent Vannie Curwen, informed that the matter spoken about in the article was not actually thrown out but the person in question paid the ticket and so it was prudent for the Prosecutor to withdraw the matter.

The “matter was withdrawn not thrown out,” he said.

The Superintendent said it is incorrect to report that the court is not hearing matters of Traffic Wardens as in that particular district court, a number of matters were heard and convictions instituted.

Late last year, Lawyer Claudette Joseph brought a matter before the High court challenging the legality of wardens after she was issued a traffic ticket by a warden in September. Thus, Curwen stated that “until this matter is heard and determined, we continue to give full support to the Traffic Wardens.”

Responding to a question about if court rules against wardens, Curwen noted “I am sure that if the court rules that the Traffic Wardens were never at all legitimately instituted, I know decisions will have to be made…you cannot have a court ruling that the wardens were illegal and yet all that have happened under them remains legal.”

The Road Traffic Amendment Act 2018, which came into force in January 2019, empowered Traffic Wardens to assist, alongside police officers, with the management of traffic on the streets.

Wardens are employed by the Ministry of Transport but are working under the direction of the Commissioner of the Police.

Topics covered in the training for Traffic Wardens include reporting writing; giving evidence; theory and practical in the fix penalty system; first aid skills; customer service and a brief history of Grenada.