Ready for the no-Carnival season 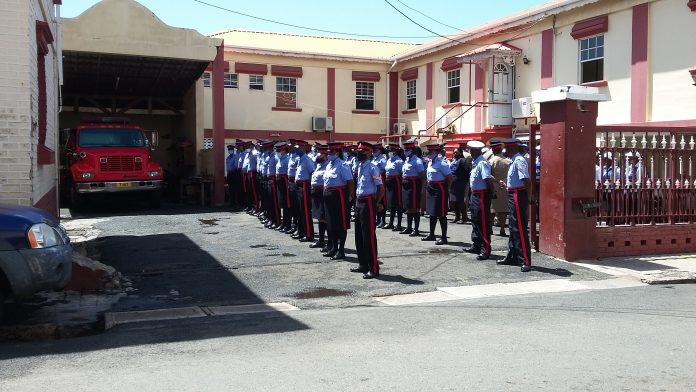 Superintendent Earl Dunbar, Officer in charge of the Eastern Division of the Royal Grenada Police Force (RGPF), said he was feeling particularly proud as he drove home from work on Tuesday (August 05) after spending most of the day conducting “routine inspections” at the stations under his charge.

These were the first inspections conducted at the Grenville, Birchgrove, Hermitage and Saint David Police Stations since the lockdown was implemented in March. In pre-COVID-19 days, division inspections could be held spontaneously and routinely on a monthly basis, in addition to the traditional biannual inspections by the Commissioner of Police.

Following an inspection of the troops, Tuesday’s visit by Supt Dunbar included an inspection of accommodations and consultations with the Officers. During the discussions, he commended the Officers for their dedication to duty since the pandemic and their continued perseverance as essential workers. The inspections included 50 Officers at Grenville, eight at Birchgrove, six at Hermitage and 24 at the Saint David Police Stations.

“We discussed our strategies going forwarded,” Supt Dunbar told The Grenadian Voice on Wednesday, stating that Officers are keenly aware that in addition to ensuring COVID-19 protocols are implemented, hurricane preparedness remains a priority. Carnival may be cancelled, but Officers know there will be some individuals who choose to ignore the Emergency Powers (COVID-19) regulations, which have been extended to August 19, 2020.

“We know we’ll still have revellers,” he confirmed, noting the team spirit among Officers is strong.

“Morale is high,” the Superintendent said, adding that “we already have a team in place” for whatever the no-Carnival season brings.

In an August 04 press release, the RGPF Community Relations Department reminded the public that playing ‘Jab-Jab and engaging in Carnival-like activities are illegal at this time.

“While the RGPF has chosen the path of dialogue and forbearance, we are prepared to enforce the laws, if needs be. Persons who are engaging themselves in Carnival-like celebrations are urged to cease and desist from doing so,” the release stated.