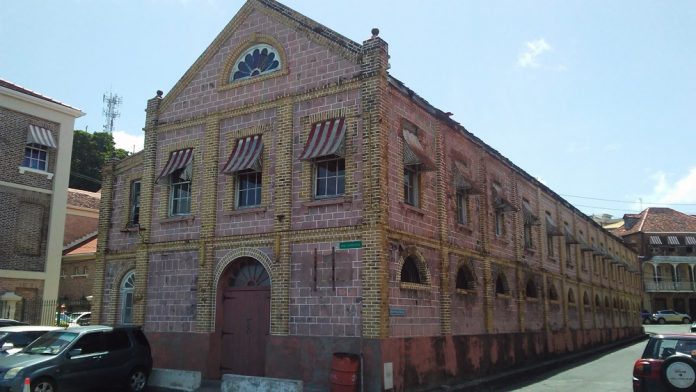 “I commend and strongly support this initiative for the rehabilitation of the Grenada Public library.” So said Governor General Dame Cécile La Grenade in her introduction to a 2013 study by the Willie Redhead Foundation (tWRF) entitled ‘Rehabilitation of Grenada Public Library Building’ that outlined a two-phase $699,575 (US) project to rehabilitate the structure over a 50-week period.

“Every effort therefore needs to be made to restore the library, a critically important institution that plays a vital role in educating, enlightening and stimulating the minds of Grenadians, particularly the youth,” Her Excellency wrote.

Seven years later, the library remains untouched, despite a commitment by Member of Parliament (MP) for the Town of Saint George Hon Peter David that there would be “boots on the ground” in 2020, according to architect and tWRF founder Norris Mitchell.

“I’ve come to the conclusion that we have a government that does not care about heritage, culture and history,” Mitchell told The Grenadian Voice on Tuesday. However, responding to this reproach in an interview, MP David said little could be done in 2020 due to the coronavirus. He says he is committed to restoring the structure for two reasons; namely, its intrinsic historical and architectural value and the pressing need for a library in the Town of Saint George.

“But I believe that there is a need for another building to establish a modern library where we can store and maintain our national archives,” he noted, adding that he had been in discussions with potential investors through the Citizen By Investment programme, as well as a possible partnership with Qatar, all of which were stymied by COVID-19.

Notwithstanding lobbying efforts over the years to have the building refurbished and its contents preserved and made available to patrons, especially students and researchers, little has been done. The structure, which opened in 1892, has survived fires that destroyed adjacent buildings in 1990 and 2000, as well as Hurricane Ivan in 2004 that only damaged the roof. The building was closed to the public in 2011 “due to progressive deterioration of conditions inside the building caused mainly by roof leakage and pest infestation (termites),” according to the WRF report.

When asked about plans the government has to restore and re-open the library, Minister of Education Hon Emmalin Pierre told this newspaper that “We are committed to re-building the library; but we are also considering alternative locations based on the challenges faced over the years with flooding.”

Mitchell disagrees that there has been flooding in the library and said “there is nothing wrong with the foundation.”

“That is just an excuse for not doing anything,” he said, noting that the government built the Financial Complex next to the library on the Carenage.

Minister of Climate Resilience and the Environment Senator Simon Stiell told reporters in August that one of the challenges with the Carenage is that it is “effectively at the bottom of a flood plain” with water coming down from above. He referred to research indicating that by 2050 there will be significant sea ingress at the Carenage.

“Tidal gages have been deployed in the area to develop projections to see where the sea level is going to be over the coming years. The results of that are quite stark; with sea level rise through climate change, that Carenage area is highly vulnerable,” according to Minister Stiell.

Meanwhile, an effort by Ann Williams, a Grenadian residing in New York, to raise awareness about the library has taken the form of a petition. More than 6,500 people have signed the petition to “Save Our Public Library and National Archives Now” and call on government to “restore and re-open this valuable building of our architectural heritage with its treasure trove of contents” of “more than 50,000 titles as well as the old records, newspapers and other materials it contains.”

The Grenada National Trust (GNT) has also been lobbying to have the library restored and opened to the public “after 15 years of neglect.” GNT President Darryl Brathwaite, in an interview with The Grenadian Voice, said “government keeps us at arm’s length.”

“We want to save what’s left,” he said, adding that there should be enough public pressure for the authorities to pay attention to the plight of the building and its contents, “government is 99% in control of the situation.”

Part of raising awareness among citizens will be incorporated into a new project for which the GNT has received $99,862 (US) from the UNESCO Intergovernmental Committee for the Safeguarding of Intangible Cultural Heritage.  Entitled ‘Proud of my Heritage: transmission and safeguarding of the intangible cultural heritage in Grenada through inventorying and education,’ the project will include capacity building workshops for community groups on mechanisms that safeguard living heritage, an education programme for students, including a pilot programme to integrate living heritage into the school curriculum, as well as a media campaign to raise awareness.

While the project is digital and does not include the physical library, it is “about raising people’s awareness and interest in heritage, so the subject is heritage itself and its importance to a community. The link to the library would be the importance of archiving and preserving heritage,” Brathwaite explained.

The GNT is also working to establish a charity bank account, based in the US, to raise $500,000 (US) for restoring the library, with a view to convert the lower level of the building into a commercial area for shops and galleries and house the books and archives on the upper level.

As for the government’s commitment to the state-owned facility, Minister Pierre said “we are aware that many persons are concerned and we invite all interested parties to work with us to make this a reality.” She noted that “the estimate for rebuilding is a few million and we have been seeking funding.  Several individuals and organisations have made commitments but none have materialized to date.  We recently had a request for a proposal and we are hopeful that this will bear fruit.  At this time the focus is on preserving the national archives.”

The brick and stone building has been part of the Carenage for generations. In 1992, marking 100 years since the structure with the red tiled roof had served as Grenada’s national public library, the facility was renamed. It became the Sheila Buckmire Memorial Library honouring the former librarian whose career spanned 27 years.

Before its doors were closed to the public, it was a safe haven for children after school. While they await their parents who were still on their jobs, they used the time to engage in reading, studying and to participate in educational programmes that kept them off the streets. One mother, whose work-day ended at four, told The Grenadian Voice, that she never worried about where her children were because after school it was the culture for children to go to the library instead of liming behind the bus terminal and hanging about the streets.

Facebook
WhatsApp
Previous articleLIAT is back in the skies
Next articleOpen letter to Karl Hood, former Member of Parliament, South-East St George